By Ryan Metivier Growing up, Ashley Baker always knew she wanted to join 4-H, as her aunt was a member of the Dairy Club, where she’d let Ashley lead her project heifer and she helped her dad milk at her grandfather’s dairy farm. At 10 years old, Ashley joined the Hastings 4-H Association in the Dairy Club for herself. Little did she know that years later the decision would lead to numerous accomplishments for herself and her family, as well as a career in politics. 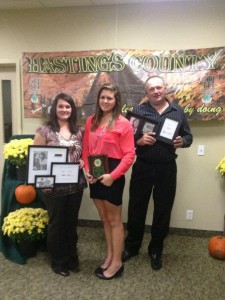 The Baker Family at the 2012 Awards Night

“Through 4-H I have met most of my closest friends,” said Baker. “4-H has taught me dedication, perseverance and given me an undying drive to succeed. I’ve learned how to handle ups and downs through my 11 years in 4-H.” After two years in the Dairy Club with a dairy calf, Ashley made the switch to the Beef Club, which she says has proven to be the best decision of her life.  Here, she’s had tremendous success in the show-ring, exhibiting beef cattle with her family, where in 2012 they were recognized through the Canadian Charolais Association as having exhibited the National High Point Female, Reserve High Point Male, High Point Bull Calf and for having been the 2012 overall National Premier Breeder and Premier Exhibitor. Her efforts in 4-H have been recognized through the Outstanding Senior 4-H Member Award, Overall Showman and Champion Heifer Awards, as well as many others at the club and county level.  Since 2004, when Baker joined the Beef Club, Megan Burnside, the coordinator of volunteer support for Region 3, 4-H, has seen her grow as a leader and person, saying she thrived in the 4-H environment from day one and has never looked back. “Ashley is a tremendously driven, passionate young woman,” she added. “When she sets a goal, this young lady puts every amount of effort she can into accomplishing it.” 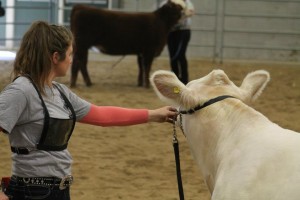 It was through an event with the Beef Club, at the Hastings County Cattlemen Association’s AGM in Madoc, where she was fortunate enough to meet the MPP for Prince Edward-Hastings, Todd Smith. Upon the urging of a family friend to ask for a placement that she needed to complete her law clerk program at Fleming College, Baker spoke to Smith, and the wheels were set in motion. “Todd’s reaction after I had asked him was, ‘sure, would you like to work out of the Belleville or Queen’s Park office,” said Baker.  The placement, which involved splitting her time between the constituent office in Belleville working on files and drafting letters and emails, and the Queen’s Park office in Toronto drafting correspondence and writing speeches, helped her to develop a love of politics. “I spent much time in Toronto learning about politics in general and meeting and interacting with many of the provincial members of parliament,” said Baker. “Through my time with Todd I have grown an incredible amount as a person. I have met many people from many different walks of life and I love it.” 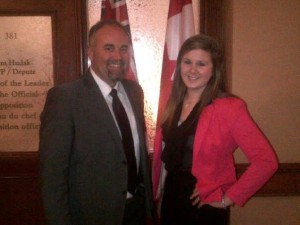 “Ashley has been a wonderful addition to my legislative team at Queen’s Park and my constituency staff in the Prince Edward-Hastings riding,” said Smith. “Her first-hand knowledge of issues facing our agricultural sector is a tremendous asset to my office.” The dedication Baker showed during her placement, didn’t go unnoticed. She was recently offered a part-time position with Smith, immediately following her graduation from Fleming. “I was ecstatic,” she said. “It’s nice to know that the hard work I put in at placement was recognized. I definitely see myself working in politics, and this job is a great way to get involved.”  Burnside believes Baker’s strong work ethic has been a huge benefit to Hastings 4-H, and will serve her well in the future. “She shows dedication and commitment that are unparalleled within her peer group and a sense of maturity beyond her years,” said Burnside. “These characteristics make her an invaluable part of our local association, and also a fabulous role model for younger members. Always energetic and full of enthusiasm, there is no doubt that Ashley found a place to call home within the 4-H program.” 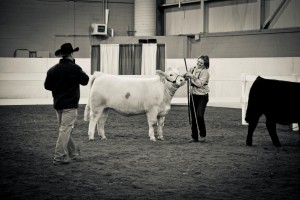 Ashley and Gucci at the Jr. Beef Expo in London in March. (Photo by Kaitlyn O'Neill).