The History of 4-H

As 4-H prepares to celebrate its 106th anniversary in 2021, we look back on how it became a positive force in youth’s lives across Canada and the world.

Two people on a dock completing teambuilding activity at a 4-H camp in the 1970s.

It Started with a Single Seed

4-H started in the United States in 1901. President Orwell of the Farmer’s Institute of Macoupin County, Missouri offered local boys a bag of corn seed to grow and show at the St. Louis Fair. His goal was to establish a youth component in agriculture – and when over 500 boys asked for corn seed, it was clear the concept was a huge success.

School authorities, parents and the agriculture industry loved this simple idea and it sparked the 4-H movement.

Finding a Home in Canada

4-H planted roots in Canada in 1913 where it found its first home in Roland, Manitoba. The Department of Agriculture donated one dozen purebred poultry eggs, purebred potatoes and seed to Manitoba youth for them to raise and grow over several months.

During this time, a Club organizer helped the youth get the best outcome for their crops and poultry. This initiative led to the creation of the Boys’ and Girls’ Club, which was a predecessor of 4-H. Many of this club’s concepts are still integrated in 4-H today, including:

Within this club, the concept of “Learn To Do By Doing” was also born. The entire premise of the club was learning through youth engagement and hands-on involvement. Although it was not established as the official 4-H motto until 1952, the basis for the 4-H learning style was well underway.

The first Club in Ontario was created in 1913 with a Potato Growing Contest in Carleton County, however, this knowledge was only brought to light in the mid 1980s. A Club established by Stanley Knapp in Waterloo County in 1915, a District Representative for Waterloo Country, has long been recognized as the first Club in Ontario from which all of Ontario’s 4-H anniversaries have been dated.

In 1919, there were 450 4-H Members in Ontario and by 1923, the movement caught fire and Clubs spread across the province, totaling 127 clubs and 2,369 participants. The number doubled over the next decade and continued to grow with the inclusion of homemaking Clubs. In 1935, the first homemaking Club was introduced, and 1,000 girls completed the project called “A Simple Cotton Dress.”

The Beginning of 4-H as We Know it Today

The 1950s brought a great deal of change for the Boys’ and Girls’ Club program. Most notably, in 1952 the name was changed to 4-H Canada. The name 4-H was selected to represent the 4 Hs in the pledge: head, heart, hands and health. At this point, the 4-H logo was also selected. 4-H counterparts in the United States were already using the four-leaf clover for the logo, so 4-H Canada adopted this logo and added a ‘Canada” banner at the bottom. The unique learning approach made headway and “Learn To Do By Doing” became the official 4-H motto.

During the mid-to-late 1950s, there was also a critical refocus of 4-H initiatives. A switch was seen that placed the focus on the individual Members and their development rather than the project. The Club goal switched from the best calf or crop to the most well-rounded individuals.

This is the focus 4-H still holds today; building leadership and life skills that equip youth with the tools they need to reach their full potential and become conscious and contributing citizens. In 1959, the first 4-H Leadership Week took place, a program that still runs today under the name Provincial 4-H Leadership Camp.

Evolving with the Times

The height of 4-H Ontario membership was in 1965 when there were 28,833 Members. By the 1980s, membership numbers were starting to drop and in 1988, the Ontario 4-H Council was established to act as a guardian of the 4-H program, ensuring its longevity.

In 2000, 4-H Ontario became autonomous from the Government of Ontario. Up until this time, the Ontario Ministry of Agriculture, Food and Rural Affairs ran the 4-H Ontario program.

Today, 4-H Ontario has an expansive reach and can be found in communities across the province, including rural, urban, and suburban areas. The 4-H program is still well-rooted in a strong agriculture history, but recognizes that everyone can benefit from the holistic and socially conscious approach 4-H takes to learning.

Agriculture, food and the environment will always be an important part of the 4-H program, but Clubs that cover non-agriculture topics are also important to today’s youth. Youth in 4-H have the freedom and ability to tackle the issues that matter to them most; this makes the 4-H program unique, ever-changing and long-lasting. 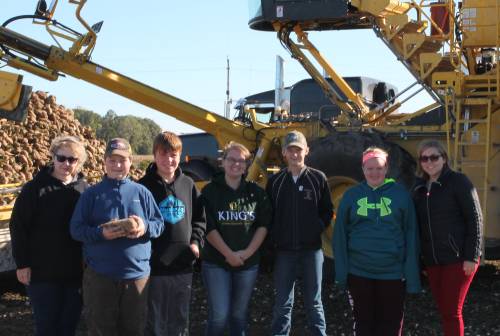