By Ryan Métivier If you asked Karen Coutts as a child if she would one day be competing in national public speaking competitions, emceeing large events and mentoring aspiring writers and editors, she likely may have laughed at you – or maybe not. A self-proclaimed shy kid who wasn’t confident speaking up in social settings, that slowly began to change as she became involved in many 4-H clubs. She got an early taste of 4-H while helping her mom who was a leader with a few projects before she officially joined herself in 1984 at age 12 and went on to complete 37 projects over the next six years. “I emceed my first Achievement Night before I turned 12, because no one else in my club wanted to use the microphone,” she says. “Being part of a small club of four to eight members meant that everyone had a role to play on the executive. And when the group is that small, you know everyone, so speaking up became easier and my confidence started to grow.” Coutts was also a leader in the Bruce County 4-H Association for seven years, serving as president for two, and association rep for five. 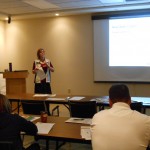 “The first time I attended a Bruce County 4-H Youth Council meeting, I brought some younger members with me from my club,” she says. “I didn’t realize that it was election day, and since I was the only person they knew, I ended up as president.” It was these sort of out-of-club activities which also included the Regional Conference (now YAC), Future Talk and PLC, that helped her develop a new circle of friends outside of her school. “I finally had a chance to be the me that I really wanted to be.” Skills like how to speak in public, how to run a meeting, how to meet new people and how to have confidence in your decisions even when others disagreed with you, were all skills she didn’t even realize she was learning in 4-H, but found most helpful in pursuing and succeeding in her future goals. Coutts has worked in many industries since, plus been heavily involved in her community with Girl Guides of Canada, local agricultural societies, and Kin Canada. 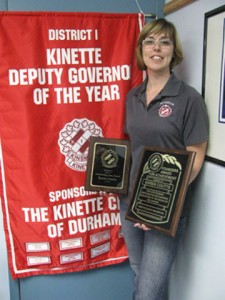 As the Deputy Governor at Kin Canada for two years, she’s twice received the Outstanding Zone Award at the district and national levels. Currently, she acts as the Secretary for District One, which serves around 1,500 members, as well as being a member of the National Kin Education committee. One of her most memorable moments came in 2011 competing in the National Public Speaking Competition. Coutts took home first place at the club, zone and district levels, while claiming second nationally – all with a speech she wrote about the skills learned in 4-H. “Seeing many fellow Kin from across the country reciting the 4-H Pledge with me was one of my favourite experiences ever,” she adds. Her proudest accomplishment though, may be receiving in six years, what often takes Kin members 15 years to earn, the Founders Award of Achievement in 2011 for her work with Kin Canada. Outside of her work in Kin, Coutts also holds the distinction of being recognized by the Learning Networks of Ontario as a Clear Writing Consultant and being one of only six people in the province who’s qualified to mentor people trying to become recognized as Clear Writing facilitators or editors. This stems from her role sitting on the Provincial Clear Writing Steering Committee. Coutts is confident that 4-H has truly changed her life and has played a major role in shaping her career success. “You never know until you try, and you’ll always be able to Learn to Do by Doing.” 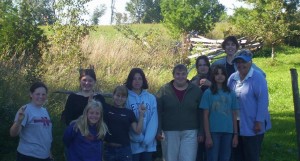 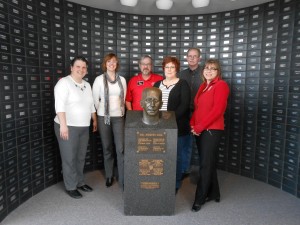 Coutts along with fellow members of the National Kin Education Committee