By Ryan Métivier On Saturday, November 2, participants from across all six 4-H Ontario regions descended upon the Royal Agricultural Winter Fair to compete in the 2013 Go For The Gold Provincial Championships, sponsored by Ontario Mutuals. Go For The Gold is a trivia competition that gives 4-H’rs a chance to learn many new facts and compete amongst their peers. After five preliminary rounds of competition, Region 4 – Halton and Region 5 – Huron, came up head-to-head in the championship game, with Huron taking the title by a narrow 165-155 margin. In a match that was fairly even for most of the game, Huron gradually increased their lead in the latter stages of the game, before a late comeback from Halton fell just short. 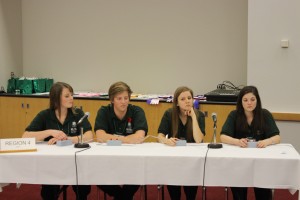 The Region 5 champions included Jeanette Schramm, Jolande Oudshoorn, Melissa Higgins, Reba Jefferson and Alternate Kate Higgins. The team was coached by Mary Ellen Foran and Marita Oudshoorn. The team is made up of several family members and neighbours, and the girls are all a part of the Wawanosh Life Skills Club. Team Captain Melissa Higgins, said her education in the Agriculture Program at the University of Guelph helped in quite a bit in her preparations, but the team also divided up the books and used a “divide and conquer” method to prepare. “This morning we were feeding each other fun facts and because of that, we did get a Who Am I question right on the first try,” she said when asked about last-minute competition strategies. 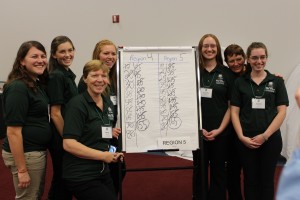 “It’s a really exciting competition and it’s just really fun to get involved with something with other 4-H people,” said Schramm. “You meet people from all across the province.” Though the team from Huron County amassed an impressive average of over 200 points per game, the competition didn’t come without its challenges. “The pop-ups are nerve racking, and the snappers,” said Jefferson. “Just cause it’s at the end of the game and true and false is hard. It’s 50/50, but it’s hard.” “It feels good to win. Sort of makes you feel like a rock star in the 4-H world,” said Higgins. “I’m super excited because my roommate was on the Region 6 team and I beat her. So now I can hang my winning ribbon on my doorway,” laughed Jefferson. The teams in competition included Sudbury (Region 1), Carleton (Region 2), Prince Edward (Region 3), Halton (Region 4), Huron (Region 5) and Oxford (Region 6). “We’re really proud of the team and all of the work they’ve put in over the past few months to prepare for the competition,” said Head Coach Foran. In order for teams to participate at the Provincial Go For The Gold competition they must have competed at and won their local and regional levels. This weekend’s competition presented the ultimate challenge to members by testing their skills and understanding of 4-H project material as well as general knowledge of 4-H, agriculture, food, nutrition and current events. “4-H is all about building skills and learning to do by doing and I’ve heard stories about obstacles and surprises and every team has fought through those to get here and have this experience today,” said Debra Brown, Executive Director, 4-H Ontario. “I hope you take many good memories of your experience today, and congratulations to everyone for all that you’ve learned and accomplished.” For more Go For The Gold coverage check out our Youtube Channel for a video covering the event and interviews with our winners here! 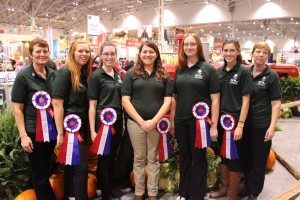