Submitted by Dorothy Shier, Durham West In 1989 Ontario Durham West 4-H had an exchange with Saskatchewan Wood Mountain 4-H. Dorothy Shier was the chaperone for Durham West. Her daughter Karen Shier, participated in the exchange. Karen stayed with Darcy, Loretta and their son Crag Smith. The Smiths farmed their ranch, raising Hereford cattle, which their family showed in their local 4-H club. Darcy, Loretta, Dorothy and her husband Keith were all 4-H members and leaders, with their families completing many years in 4-H. Some also went on to become leaders, and now their grandchildren are 4-H members too. Over the years the families kept in touch, and the Shiers travelled west to visit the Wood Mountain 4-H Club at their Achievement Day. They also exchanged letters and pictures at Christmas, telephone calls and emails. In Sept 2013 Loretta and Darcy decided to come to Ontario to stay with Dorothy and Keith. Keith and Dorothy’s granddaughter Kelly Crawford is a member of the Simcoe North 4-H Beef Club. Keith and Dorothy took Darcy and Loretta to see Kelly’s Achievement Day and Kelly’s leader Kevin Moore, had a contest for all alumni members to participate in. Seeing as 2013 was Canada’s 100th Anniversary, Kevin wanted all of the alumni to show a beef animal at the end of the Achievement Day. Darcy and Keith took up the challenge and a great time was had by all! 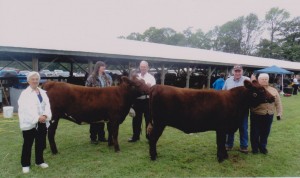