By Ryan Métivier 4-H is many things for many people and for Stephanie Huitema from Haldimand County, it proved to be a huge stepping stone in landing her current job as Marketing Coordinator at Erie Mutual Insurance. 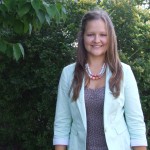 A 4-H member from the time she was 16, up until she graduated from the program, Stephanie was a part of many clubs including sewing and quilting, cooking, baking, lifestyle, sheep, goat and many more. Stephanie was also a participant in yearly judging competitions, as well as the Go For The Gold (GFTG) competition. As a GFTG competitor, she went to Regionals three times, where she won twice, and also twice went to Provincials, placing fourth in 2010 and fifth in 2012. In her graduating year of 2012, Stephanie was named Outstanding 4-H Member for the year, something she was honoured to be acknowledged with. “What a great way to finish my career. I was speechless and remember not making any sense when I was thanking and accepting my award,” she says. This past year, she was also given the responsibility of hosting the 2013 banquet. How she went from accepting this award, to working for Erie Mutual, came from a newspaper article her now boss, read about her winning the Outstanding Member Award. 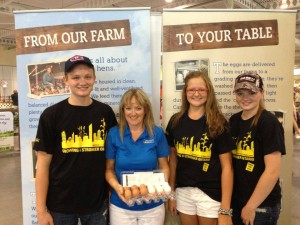 “My boss went on to ask the staff if anyone knew me. A friend from public school who also works there said she knew me and went on to email me and tell me to bring in my resume,” she says. “I went from two part-time jobs, to the stability of a full-time position and I am so grateful to work at a company that supports agriculture and 4-H. It is a very community-minded company.” Stephanie says 4-H helped her career by giving her confidence, life skills, leadership qualities, and life-long friendships. It also helped in getting her name out there in the community. 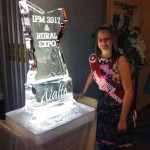 “What I have enjoyed the most is the process of 4-H,” says Stephanie. “I started out so young and received help from older members, and over the years I saw myself transition into one of the older members that helped the younger ones.” Even after graduating from 4-H, Stephanie remains connected and active in the 4-H community with three siblings and two cousins as members, and her mom as a volunteer and leader. Today, Stephanie is in her second year of volunteering and is looking forward to leading her first club this spring with one of her co-workers – also a 4-H volunteer. The club is called “Girl’s Night Out” and teaches young girls about self-esteem, confidence, the importance of healthy eating, as well as body and hair care.