Written by Ryan Métivier 4-H alumni Sarah and Kevin Wolters are the proud creators of the Calf Canopy, an idea that was inspired while they were doing chores at Sarah’s family farm, Huffmandale Holsteins. The two were both born and raised in the Quinte area and have been married since the fall of 2013. Originally designing the Calf Canopy as a project to help them group-house their pre-weaned calves without taking the risk of building a new facility, they eventually realized they had a marketable product. While working at their current work place, The Machining Center, Sarah and Kevin began 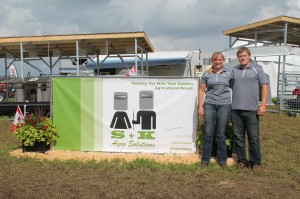 working on a system to develop the product. They had the advantage of having all of the tools necessary for fabrication at their disposal. While nearing completion of their first canopy, their boss (also Kevin’s father), saw they were onto something and enlisted the company team to help in the development of the product. “The Calf Canopy is a product that tied our two families together,” says Sarah. “The Huffman family helped inspire the idea and establish the functions required of the canopy. The Wolters family assisted us in making the canopy functional and marketable.” Two prototypes were built (one that was compatible with three regular hutches and one that holds one super hutch), and were brought to the Hastings County Plowing Match. After some amazing feedback, they’ve also had a display at the Quinte Exhibition and Canada’s Outdoor Farm Show. Sarah and Kevin have decided to take their ideas a step further and have started their own company, S+K Agro Solutions, to sell their product line. The company is now a division of The Machining Center. Long before they were business partners, Sarah was a 4-H’er. A member since the age of 10 in Hastings County, she’s participated in numerous clubs and attended Leadership Camp and Judge-It Day. She’s also still a leader in the Hastings County Horse Club. 4-H can also be credited for bringing the two together, as they met at a mutual friend’s party – a friend Sarah knew through 4-H, whom Kevin knew through school. From there, Kevin also became a 4-H member when he was 20 and participated in the Hastings County Plowing and Dairy Management clubs. Today he still helps with the milkshake booth and any clubs and events Sarah is involved in. “4-H helped me connect with other farmers and gave us a lot of valuable resources and contacts to help us get a good start,” says Kevin. “4-H had a huge influence on me because I grew up involved in it and it helped me establish relationships within my community and all over Canada,” adds Sarah. She also lists several skills she’s taken away from 4-H including: team building, speaking with self-confidence, leading, putting herself out there, participating in meetings and documenting key ideas. Looking forward, Sarah and Kevin hope to continue to improve their product and develop new concepts. “For now S+K Agro Solutions is known as the developers of the Calf Canopy, but If another neat idea comes our way, we will look into developing that idea into a product,” she says. With a goal of being a company that comes up with ideas that are innovative, functional and adaptable, they encourage producers to come forward with ideas or custom needs that they need completed on their farms. For more information on S+K Agro Solutions and the Calf Canopy, visit: www.themachiningcenter.com/sandkagrosolutions