This Couple Is Completely Fore 4-H

Written By: Ryan Métivier If you’ve ever attended one of the Ontario 4-H Foundation Golf-East tournaments, you’ve most likely seen and had the pleasure of speaking with a couple of friendly 4-H faces in Gib and Elsie Patterson. As owners of Anderson Links Golf and Country Club, the Pattersons have hosted the tournament in Ottawa for the past eight years — right from its beginning. The couple both partook in 4-H as members, and credit 4-H for bringing them together into what has turned into 52 years of marriage. 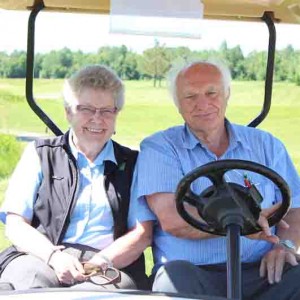 Elsie, who is originally from Tweed, Ontario says her sisters and her whole family were involved in 4-H when she was young. Her mother was a leader as well. “We’re country people and a farm family. 4-H was a family and it was an outing for us from the farm,” Elsie explains. Growing up, Gib’s farm was not too far from where Anderson Links sits now, close to the Ottawa airport. When his older brother turned 16 and got his driver’s license, they began attending 4-H meetings. “4-H was one of the best clubs or organizations for young farm people at the time,” he says. “I think it still is.” So after joining 4-H in 1954, the following year the brothers were lucky enough to win a trip to National 4-H Club Week, where they represented Ontario in judging potatoes for 4-H competitions. “We went to the Royal Winter Fair and we were very happy to come out as the winners. We even beat the team from Prince Edward Island. We were happy about that.” Elsie adds a few more memories about the many trips and exchanges she took part in as a youth, and also about the friendships she made, some of which have been lifelong. “It was meeting the people — meeting young people our age from all over Ontario — that  I remember most.” Elsie reflects on a friend her brother met from England, which her family got to know very well. “All these years my mother had kept in contact with him and we still go back and forth with him,” she says. “He’s 84 now and his son is in Manitoba. Every spring or fall he comes to see his family and he always makes the trip to Belleville to check in on my family. It’s been a wonderful experience.” But despite the many memories they both share of their time as 4-H members, Gib concedes that meeting Elsie was definitely his biggest takeaway. Working in the summer of 1959 as a summer assistant in Frontenac County with a gentleman who had actually been his 4-H Ag Rep when Gib was a 4-H’er, Gib was able to use the connection to land the Assistant Ag Rep position for Hastings County after he graduated college. Hastings includes the Tweed area, where Elsie was the secretary in the agricultural office. Decades later, the couple have four kids who have all been through 4-H, plus 12 grandkids, of whom two are also involved in the 4-H program. Gib led several clubs such as golf, plowing and forestry clubs, but outside of 4-H, he says he loves to teach and was a teacher for nine years in high school. He has an interest in young people and likes learning and staying curious. It is this that he tries to teach to the staff at the golf course. “I teach them to be curious. To keep your head on a swivel and keep moving. See what’s happening and try and understand why things are happening. I call it the game of life. You never have to work when you play the game of life.” That curious nature is likely what helped to get the ball rolling on starting up the Golf-East Tournament. During a Queen Of The Furrow competition in Peterborough County where Gib was judging, Lyndon Stewart, a former 4-H Ontario Executive Director, was also the emcee. “That night they were in our little cabin and Lyndon and Gib talked half the night and Gib said if you can have a tournament in Guelph, then why can’t you come east?” explains Elsie. Anderson Links is the Patterson’s third golf course. Gib opened his first golf business in 1971 on the farm they bought from his father, which his grandfather originally bought in 1901. Their first golf course, Emerald Links of Manotick, opened in 1990. This was followed by Cloverdale Links in Winchester in 1996, and then Anderson Links in 2007. The Pattersons also own a driving range and mini putt facility in Orléans. Gib has his broker’s license and is a developer in real estate, although he’s since passed the torch of building homes onto their son, who built the very clubhouse 4-H golfers meet in at Anderson Links. The family has also built three subdivisions around their Emerald Links course. Eight years into the Ontario 4-H Foundation Golf-East Tournament the Pattersons are happy to see the 4-H system still carrying on each year when they host the tournament. If you’re ever in the Ottawa area and looking to hit the links, be sure to keep an eye out for Gib and Elsie, who are always happy to share 4-H stories and memories.