By Ryan Métivier All across the province 4-H’ers have been competing amongst their Associations and regions all year for a chance to represent their region at the Provincial Go For The Gold (GFTG) Competition at the Royal Agricultural Winter Fair in Toronto. The Go For The Gold competition is a great experience for 4-H members to increase their knowledge of 4-H project materials, agriculture, food, community, events and much more, all while doing so in a team atmosphere. There are 4-H Association level and 4-H Regional level competitions hosted by local 4-H volunteers. This year’s championship took place on Saturday, November 8 during The Royal and was highlighted by a dominating showing from the team from Kawartha Lakes-Haliburton of Region 3 who claimed the title. The team of first-time competitors went 5-0 in round robin play and amassed a total of 990 points. After this impressive showing, they entered the final against the team from Halton and Region 4 in a rematch of the first round robin game. KLH was able to come out on top once again though with a 185-120 win. 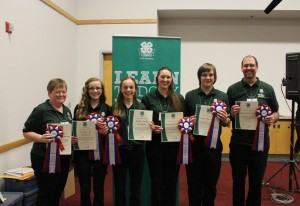 “I was stressed about mid-terms at university and everything so it was kinda like a crash thing,” said KLH team member Cassandra Gorrill when asked about how the team prepared for the competition. “But Sadie and Maggie are super intense on drilling and that’s basically how I prepared for today. You just kinda learn as much as you can in a short period of time. It’s intense.” “The second we won Regionals is when we started preparing for this,” said Trevor Kennedy. “I think another thing that went into the preparation for today was reciting lots of acronyms and symptoms of diseases and things like that that came into play today.” Despite the undefeated record, the team from KLH admitted there were many challenges throughout the day. “The hardest part was definitely not second guessing yourself,” said Sadie-Jane Hickson. “Knowing that you know the answer and you know your team knows the answer, but sometimes you’re just not quick enough on the buzzer.” “I think one of the hardest parts was just staring down the other team and just having to face them, especially when you know people on the other team,” added Kennedy. Getting involved with GFTG was a way for the team’s whole county to come together. 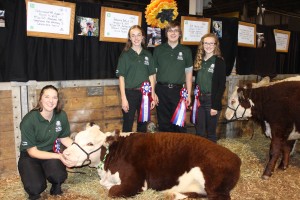 “It’s a county thing, so our whole county is involved,” said Maggie-Jo Hickson. “Some clubs count it as a meeting and everyone in our county has such a great time at that night, we just want to continue on with it.” The team was quick to thank many people for their contributions leading up to and throughout the competition including their parents, friends and supporters and everyone who was involved at the county, regional and provincial levels. They also thanked their coaches Diane Armstrong and Craig Kennedy. “They’ve put a lot of hard work into it and they should really be proud of themselves,” said Armstrong. “They knew a lot of answers to questions that I had no idea on. They did a great job and the day was excellent.” Other teams that competed in this year’s provincial competition included: Temiskaming – Region 1, Russell – Region 2, Huron – Region 5 and Elgin – Region 6. For more photos from this year’s Provincial GFTG Competition click here. Go For The Gold is made possible through the generous support Ontario Mutuals.