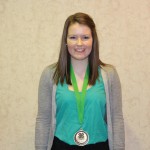 The Most Wonderful Time of the Year: The Royal Agricultural Winter Fair

It’s the beginning of November and everyone is preparing their calves, putting together projects and making sure all their school work is done. To me the Royal Agricultural Winter Fair is one of the most exciting times of the year. The smell of cinnamon buns as you walk through the shops or the smell of cattle spray it all makes the Royal very exciting.

I have been attending the Royal since I was a child and I have grown to love it more and more each year I attend. The first year I ever showed an animal at the Royal it was my 4-H rabbit in 2009 and that was an amazing experience. I then began showing cows and my biggest goal was to make it to the Royal. In 2013 my second year in the dairy club my chance to go to the Royal had finally came. I came home every weekend from school to work with my calf to prepare for the show ring. The night before the Royal I was bathing my calf in the freezing cold but it was totally worth it. That weekend was one of the best experiences I have had the Royal. All of the hard work that is put in all summer and fall finally pays off when you walk into the Ricoh Coliseum with the bright lights and the judges standing in the middle of the ring. The feeling of achievement doesn’t even begin to describe that feeling after you come out of that ring and you have just done the best you have ever done showing no matter if you are first or last. I have met many people through 4-H and the Royal is always a great chance to see people I normally don’t get to see over the year.

This year I got the privilege to go to the Royal as a 4-H Ambassador. I attended the Royal for three days and out of those three days I got to be an Ambassador for two of them. For the first day I watched the opening ceremonies for the 4-H beef show and I also walked around and talked to lots of people. Later in the day I had a shift at the 4-H booth where I got to talk to 4-H leaders and members and the general public. I even saw famous people in Ben Mulroney and Amber Marshall from the CBC show Heartland. The next day I watched some of the TD Dairy Classic and I had another shift at the 4-H booth. I got to run a game for children where they picked an object out of a basket of corn then I would ask them a question about the object and then they got a prize of either a sticker or a pencil. Many school groups came and played the game that day and they all got to learn about agriculture.   Over the years I have had many great experiences at the Royal whether it’s making new friends, catching up with old ones, shopping or showing. In the future I look forward to showing again and meeting many new people. I encourage all 4-H members to take a hold of the Royal Agricultural Winter Fair and try to get involved as much as possible. I believe the Royal is a great place for all ages to learn about agriculture. I encourage everyone at some point to go and check it out you won’t regret it.