How 4-H Membership Turned Into A Career In Agriculture By Ryan Métivier Three years ago Samantha Klaver joined the 4-H Ontario Ambassador program and became one of the faces of the program throughout 2012. Already a 4-H member at the time since she was 11, she says the program definitely helped to shape who she is today. From improving her public speaking, as well as confidence, and interview, presentation and etiquette skills, to enabling her to gain a new career, participate in competitions and meeting people of similar interests, Samantha took advantage of everything 4-H had to offer. “I really enjoyed learning about such a broad spectrum of topics,” she says. “It allowed me to learn a little bit about so many different topics that interested my peers. Without 4-H, I would not have been able to visit some of the places I have, nor meet so many people whom I am still in contact with today.” 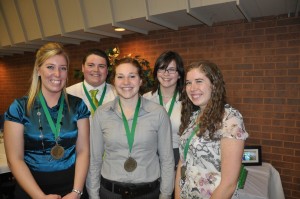 Samantha’s first 4-H club was Wearable Art, after hearing about it through her church bulletin and joining on her mother’s suggestion, as she had been a 4-H member herself as a child. That first club lead to many more and eventually her position as an Ambassador. Looking back at her scrapbook, Samantha remembers the sponsor tour day, learning about other agribusinesses; the GROWMARK Annual General Meeting where she met Future Farmers of America members and farmers; visiting the Chicago Board of Trade; and, the UPI Rendezvous, where she had the opportunity to enjoy a surprise concert by Emerson Drive. Today, Samantha has parlayed her experiences in 4-H into a career in the agriculture industry. As a Field Marketer for Hensall District Co-operative in Seaforth, Samantha works with farmers in Huron and Perth Counties, assisting them with growing successful crops, such as food grade soybeans and edible beans. The role gives Samantha lots of variety, as she will spend some days attending meetings and training, and others on the road meeting with farmers to determine crop plans for the upcoming growing season. The required public speaking skills were something she worked to develop during the Ambassador program. “I have a lot more confidence in myself when speaking in front of crowds, which made my last year in 4-H the most memorable,” she says. While competing in the Canadian Young Speakers for Agriculture Competition last November at the Royal Agricultural Winter Fair, she noted in her speech that without 4-H, she would not have been there speaking. “I used to be really shy and quiet, but 4-H changed that about me and applying to be a 4-H Ambassador only seemed like the right thing to do.” The Ambassador program also gave Samantha a great foundation to become a 4-H Leader. She took up volunteering this year, and says she looks forward to sharing 4-H with everyone she meets. This summer she had the opportunity to chaperone a group of 4-H members to the Peace River area in British Columbia. “An organization that has literally taught me to ‘Learn To Do By Doing,’ also taught me that anything is possible as it has lead me to keep working and learning in agriculture; the industry I grew up in. I wouldn’t change it for the world.” The  4-H Ontario Ambassador Program celebrates ten years of senior youth leadership in 2015. The Ambassador program is generously sponsored by GROWMARK, Inc and UPI Energy LP.