Telling Stories of Agriculture Through The Camera Lens By Ryan Métivier When you hear the name Bruce Sargent in agricultural circles, it’s synonymous with high quality video production, an entrepreneurial spirit and his company, Farm Boy Productions. It is an enterprise that has allowed him to put his talents to work on numerous projects in the agriculture industry. However, it wasn’t that long ago that Sargent was a student at Clarington Central Secondary School, planning a career in media and showing calves in 4-H dairy projects. 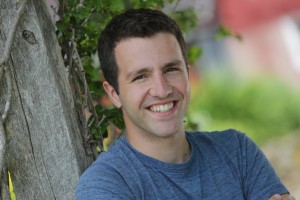 Sargent, now 24, was a member in 4-H from the age he was eligible, until he graduated—only missing two years due to other commitments. With grandparents and parents involved in the program, as well as all four of his siblings, he fell in love with the program too. Today, he’s in his second year of leading the dairy club in Durham East—a club of which three of his siblings are members. “I really like leading. It gives me the opportunity to give back to the community that raised me up and pass on some of my experiences to the younger seniors,” he says. Sargent still counts many of his close friends as people whom he met through 4-H-—and specifically through Provincial 4-H Leadership Camp. Whether it’s friends he sees regularly, or people he connects with in the agriculture industry, familiar 4-H faces are always nearby. Heavily involved with all things media and communications in high school, Sargent was assigned the task of creating a logo in his Communications Technology class, which would be used to brand his work for the rest of the year. Farm Boy Productions popped into his head. After being assigned a project to work with a poultry farm on creating a website and business cards, the business model slowly began to take shape. This continued into university when he applied to the Summer Company Program, which provided more experience and a chance to put his business education to work, while still allowing for time working at the family farm. His work landed a few newspaper and TV stories, including coverage by the Ontario Farmer, which continued to open new doors. Now five years into the business, Sargent has taken on countless projects—and the work keeps piling up. Word of mouth, networking and leveraging media at the right time have all helped to grow Farm Boy Productions into what it is today. “The biggest thing is word of mouth,” says Sargent. “Once you make a couple of good contacts and impress the right people, their friends in the industry will call on them and say they need somebody and if you’ve impressed them and if you’ve done well, they’re going to promote you. And that happens a lot, especially since the Farm & Food Care project.” That project was the Faces Of Farming calendar, which featured Sargent’s family in 2010. A couple of years later, with his company up and running, Sargent approached Farm & Food Care and pitched the concept of creating video interviews with those farmers featured in 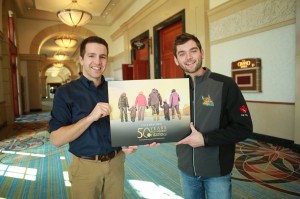 the calendar. The idea took—and now sees Sargent helping not only with photography for the calendar, but also creating related videos. By scanning a QR code in the calendar, readers can view this additional media content from Farm & Food Care. “It’s the perfect day,” he says. “You get to meet different farmers from all over Ontario and they’re all from different corners of the industry. It’s a really fun ‘I Love My Job’ day.” Among many exciting projects, another is the Egg Farmers Of Ontario book he completed by visiting 240 farms across Ontario, doing photography and videography for their 50th Anniversary. Many of the 1,000 copies produced now sit in the hands of every MP, MPP, farmer and sponsor of Egg Farmers Of Ontario. Each fall, Sargent also attends the Agricultural Bio Technology International Conference, typically held out west, where he conducts three video news broadcasts per day from the show. “It’s a cool add-on to my typical video production, as I get to play a news host for the week.” Sargent looks at many of the skills and experiences he gained from his time in 4-H as being building blocks to his success today, citing communication and work ethic as important traits to have in the business world. “Public speaking is a hallmark of the 4-H program—and being able to present reasons or give a speech,” he says. “Those skills from speeches and debates still come through on a regular basis in meetings and presenting myself at networking events,” says Sargent. “The work ethic is huge, because the livestock programs in 4-H and a lot of the clubs—you can’t do them unless you put 110 per cent into it and the reward you get back when you do put that effort in is definitely what I’ve applied to my business model.” While it may seem like more and more doors keep opening for Sargent and Farm Boy Productions, that didn’t happen overnight. Sargent says he has been annoying his siblings reciting his “elevator speech” to use at networking events for years, and then working to build up contacts, a good portfolio and a name for his work. “Entrepreneurship is really hard because you feel like you always have to justify yourself and prove yourself,” he says. Farm Boy Productions is now a division of Glacier Farm Media. It’s a partnership born two years ago, while Sargent was on a project with Ontario Agri-Food Education at Canada’s Outdoor Farm Show. While interviewing Glacier’s publisher about jobs in agriculture, he impressed enough to be invited to meet with the company’s vice presidents later that day. After a follow-up meeting, the deal was made official the following July. It is a deal that has allowed both parties to share resources and grow their businesses. As the Farm Boy Productions name and business continues to grow, Sargent is looking to incorporate aerial video and photography into his repertoire, to complete a documentary on farming, add to his skills force and to work with Glacier Farm Media on expanding into projects across the country. He also hopes to use his skills and connections to help grow the profile of farming and agriculture because not a lot of people know what goes into making their food. “I want to continue to do that any way I can going forward, because we as an industry have to do better at telling people what we do,” he says. “I really care about agriculture. It’s provided for my family and I believe in it.”