The Family Business Is Dairy

The Family Passion Is 4-H By Ryan Métivier Emily den Haan remembers many days spent on a tractor with her mom, cutting hay and brainstorming ideas about starting up an on-farm dairy operation. Today, those plans have come to fruition and she and her family now sit around the table to brainstorm new products to sell at Sheldon Creek Dairy, which is located on their family Haanview Farm in Loretto, Ontario. The den Haan name is well known in the 4-H community. John, and wife Bonnie were members as youth and have continued involvement in the program to this day. Whether it be their deep commitment to volunteering, or time spent leading the organization—John was Ontario 4-H Council President from 2012 to 2014—they have been heavily involved with all things 4-H. 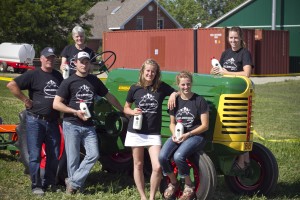 “4-H has been a big part of our lives, both as members and volunteers,” says John. “The program has given us many opportunities to learn and meet new people as well as to give back by helping to develop the next generation.” The den Haan family immigrated to the Alliston area in Simcoe County from Holland after World War II in 1953 and after three years of hard work they established Haanview Farms. Born in 1955, John was the sixth child in his family. In 1982, he and Bonnie married and began farming together developing the Haanview Herd. Together, their family continued to grow with four children of their own in Scott, Andrew, Marianne and Emily. John and Bonnie passed their love for 4-H on to their children. All four participated in 4-H as youth, and have remained involved in one way or another into their adult lives. Scott has two daughters who are of 4-H age and excited to join. Andrew is a dairy judge who judges 4-H shows, Marianne has participated as a 4-H leader and Emily is currently a leader for both the South Simcoe Crops Club and the Cookstown Dairy Club. Agriculture has always been a staple in their family and after hearing members in their community express a desire to purchase whole milk from a local farm, they built and created Sheldon Creek Dairy. 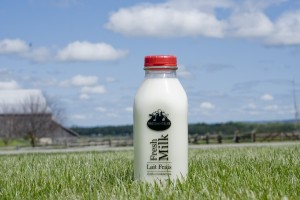 At Sheldon Creek Dairy products are pasteurized, but not homogenized. The company produces whole white milk, skim milk, chocolate milk, yogurt, labneh and cream, as well as strawberry milk and eggnog in season. “The goal is to produce fresh, local products,” says John, emphasizing the importance consumers place on knowing the source of products. “Education about agriculture and food is also a big part of our business.” Part of that education has come in the form of private farm tours where visitors see what the cows are fed and how they are milked. This season, two free events were planned—with Annual Day on the Farm in June, and another coming up for the Fall Harvest Festival. Local 4-H’ers are recruited to help run the events. Keeping things in the family, their daughters are both heavily involved in the business. Marianne works for Sheldon Creek Dairy overseeing the production of various products, managing the distribution of products to store shelves and building the company brand through social media, advertising and working with service groups within the communities where they sell their milk. The growth of the company has been built on a strong foundation, which has grown steadily over the years. The farm continues to develop, gaining new technologies to keep up with the times. Sheldon Creek Dairy was another way of adding value to the farm in 2012. The company has seen growth through a trend for consumers to source food locally, wanting to know where their food is coming from, and also wanting more whole foods. “It is an exciting time in agriculture, where we can myth-bust the common misconceptions consumers have about agriculture and the food grown here in Canada,” says Marianne. For Marianne, being able to advance the company alongside her family has been an amazing experience. “When you work in a family business, everyone knows that you are all in this together and each of you work towards that common goal. We all grew up with the same work ethic, and when working alongside your family, you are a natural team.” Emily’s main responsibilities come on the dairy farm, where she is in charge of herd care, milking, field-work and other day-to-day tasks around the farm. She’s also an Associate Sales Representative for DuPont Pioneer and has a small Purebred Shorthorn Herd, conveniently located across the road from Haanview Farms. “We have always been a close family, my brothers and sisters-in-law included. It’s really nice to work with people who are more than just co-workers,” she says. With three grandchildren already, allowing the next generation to become part of the business has been part of the succession plan John and Bonnie have been developing. Their operations have also created jobs for others in agriculture, including 4-H’ers. Sheldon Creek Dairy employs six full-time and four part-time employees, while Haanview Farms employs another three full-time and two part-time. “It has given an opportunity for students to experience agriculture as a part-time job as well as given others a full-time job in a rural environment,” says John. “As a result HR has a whole new meaning.” “When I see 4-H on a resume, it is an automatic for an interview as I know the program prepares youth with the tools needed for success,” adds Marianne. For Marianne, those tools to success included learning how to lead and how to let others take the lead, public speaking and how to engage an audience when making a pitch to potential customers. She also learned life skills such as cooking, sewing and learning how to be curious. 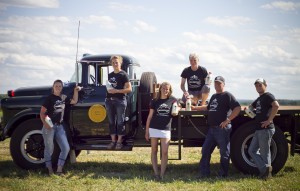 “4-H taught me perseverance and to be persistent, learning that everything in life takes work and everything doesn’t come easy,” she says. “It taught me to remember your roots and where you came from, to give back to others and to be more than just a member of your community.” For Emily, learning how to communicate and how others communicate, as well as how to be professional yet still have fun, were skills she took from her time in 4-H that have translated to the working world. Being able to work in a team and develop a strategy are skills John says he learned back in his own 4-H meetings. “Those [skills], along with having the confidence to take risks and talk to customers freely about agriculture, all began through speaking in public and explaining your choices at 4-H meetings.” John has seen first-hand the effect and benefits 4-H can have on youth with children of his own. “4-H teaches self-confidence and decision making through judging and developing a strong work ethic by being willing to learn, he says. The den Haan family work ethic has made their company into the success that it is today, with over 100 locations within a 100-mile radius of the company carrying Sheldon Creek Dairy products.