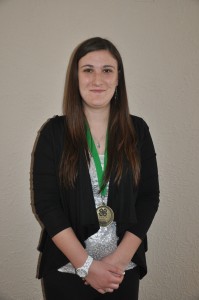 I was fortunate enough to get to attend the Royal Agricultural Winter Fair for six days in early November. I wasn’t taking in the Royal as an Ambassador, but instead as an exhibitor in the National Limousin Show and as a 4-H member in the National Junior Beef Heifer Show. During my time on the Exhibition Grounds, I came to notice one thing in particular. Teamwork. When you walked around the barns on any of the open show days, you saw multiple people at each chute, working to get one single animal ready. Sometimes, you even went so far as to see five, six or seven people working on the same animal. There would be a couple of people fitting legs, some working on the body hair, another balling a tail and of course, someone to keep the animal happy. At each chute you walked by, there was one thing that I noticed they all had in common; a majority of these people were all involved in the 4-H program at some point in their lives. Whether they were involved as members throughout their teen years or as leaders later on in life, many of these people who were working together shared their 4-H background. The 4-H show, also known as the National Junior Beef Heifer Show, began at the Royal with move in on Saturday, November 7 and wrapped up on the following Monday night. Over these three days, I witnessed so many people come together. Witnessing the camaraderie between members made me extremely proud to say, I am not only a member in this amazing program, but also an ambassador of this program. Let me share some of the things I saw during the National Junior Beef Heifer Show. First off, I witnessed the grand champion, reserve champion and honourable mention showmen hug each other in congratulations instead of merely shaking hands at the end of the final drive of senior showmanship. None of these people were next door neighbours, or even from the same counties, but the three competitors were so excited for each other’s success that congratulations came in the form of a hug. I thought that this really showed other 4-H members, younger ones in particular, how to be true competitors while showing great sportsmanship. This act of kindness between youth in the ring shows how 4-H members are encouraged to work together, even with your fellow competitors, not just your teammates. The next amazing act of teamwork that I had the honour of witnessing was three different counties working together on conformation day to get five different heifers ready. Each of these counties were from a different corner of the province, and, to the best of my knowledge, had never worked together before. The agreement started off as, “Hey, can we bring our chute over, you have more room?” and ended with members of all different ages and all different breeds of animals working together to make the heifers look their absolute best. I thought this was another fantastic example of teamwork from 4-H members. It showed members that it doesn’t matter if the people you work with don’t have the same farm name or county on the back of their jackets, great things can still be accomplished, and lifelong friendships can be established. The final thing that I noticed was true kindness between members. On the Monday of the conformation show, I was waiting to go into my heat in the marshaling area. Near me, there was another competitor and his dad, waiting to take his animal in for the champion drive for the breed ahead of me. A heifer exiting a previous class was in a rush to get back to the barn and pushed right up against the show side of this heifer, messing up her body hair. What I saw next made me smile. A 4-H member who had come up to the ring only to see what class was in the ring, happened to be walking out and saw this heifer hit the one waiting to back into the ring. The member then walked up to the boy holding the heifer, and asked if he would like the heifer combed out to make her look good again. The showman accepted. The catch? I am quite certain that neither of these two 4-H members knew each other prior to this incident. The 4-H member walking out of marshaling area combed out this boy’s heifer out of kindness. The 4-H shows don’t allow parents or anyone who is not a 4-H leader to handle the animals, which meant that the boy would have had a very difficult time trying to comb his heifer out and hold her at the same time. A few weeks later, this moment is still fresh in my mind as it is probably one of the kindest random gestures I’ve gotten to witness while a 4-H member. During my time at the 2015 Royal Winter Fair, I saw 4-H members work together in a way that made me proud to be a part of this century-old program. The 4-H program has obviously taught youth to work together as a team, to help each other out, and to be proud of others accomplishments; even if it means that you didn’t have as good of day as another person did. As my year as an ambassador comes to a close, I am so glad that I got to witness how 4-H brings people together in such an amazing way. It was truly the best way to round out a 4-H season.