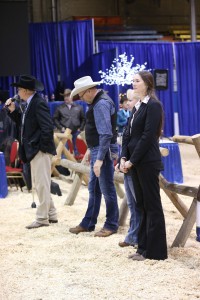 Annually, 4-H sends a team of youth to compete in the 4-H and Youth National Judging Competition at the Canadian Western Agribition. In her third year of competing, Cassandra Gorrill set her sights on improving her results from years past and finishing in the top five of the competition. After two busy days of judging different classes and mingling with other teams and sponsors, Gorrill surpassed her goal by being named Grand Aggregate and gaining the opportunity to judge the First Lady Classic.  Gorrill, of Kawartha Lakes-Haliburton 4-H Association, traveled to Regina for the competition with four other members and one chaperone to make up team Ontario. The competition is open to 4-H members and college and university students from across Canada. A member since 2006 when she could first join, Gorrill has been a member of numerous clubs as well as being a Youth Leader for Beef. “I enjoy the people and skills the most in 4-H,” she says. “I love learning new things and teaching younger members all the skills I can pass along. I love the people involved with 4-H.” On the third day of Agribition, winners were announced and Gorrill was thrilled to have placed in three classes:  Dairy Cows, Charolais Bull Calves and Barley Class. Then came the countdown of the top five spots and the realization she’d been named Grand Aggregate. “When they announced my name as the Grand Aggregate I think I experienced shock,” says Gorrill. “I was happy and proud and couldn’t wait to call my mom, but as I walked up to receive my buckle and trophy, my hands began shaking and my tummy clenched with fear at the thought of judging the First Lady Classic.” After getting over those initial nerves, she settled in and evaluated all the cattle the way she usually does, not worrying about how she would place them in relation to the more experienced judges. In the end she was right on point picking the champions of both the Futurity and the Bred Heifers categories. “There was no greater honour than judging the First Lady Classic,” she says. Gorrill says her time with 4-H directly prepared her for this opportunity by giving her the ability to have fun no matter what, the confidence to meet new people, to speak in public and the ability to judge different classes. Her county’s Evaluation Night and Peterborough Junior Day and Judge-It! Days exposed her to competitive judging and gave her the foundation for this competition. “If I had to tell a youth who wasn’t yet involved in 4-H something, it would be that they were only a step away from making some of the best memories, building some of the best friendships and connections and experiencing the best opportunities that will impact you in the future,” says Gorrill. “4-H is great big family filled with people who want to help you explore your passions.” 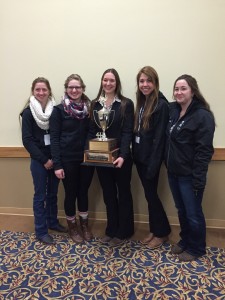