By Ryan Métivier When you’re talking about someone who epitomizes everything that 4-H stands for, the name Bertram (Bert) Stewart quickly comes to mind. Bert and his family have been a part of every level of 4-H and the agricultural community throughout their lives. Stewart is a world-renowned judge and pioneer in preparing and exhibiting dairy cattle, a mentor and coach to countless youth and tireless supporter of all things 4-H. Stewart is the seventh of eight children born to Ernie and Jennie Stewart who owned a family farm in Peel County. Over the years each of the children, as well as their kids and grandkids have been avid 4-H members and supporters. Bert now has a five-year-old great grandson who may soon start another generation of 4-H’ers in the family. All told the family has been involved as members or leaders in Peel, Halton, Waterloo, Wellington, Bruce, Middlesex and Kent 4-H Associations, as well as in Portage la Prairie and Steinbach in Manitoba. After graduating as a 4-H member, Bert quickly transitioned into a volunteer in Peel County before later moving to Halton County. Bert became heavily involved in dairy and judging clubs and was instrumental in starting what is now the TD Canadian 4-H Dairy Classic at the Royal Agricultural Winter Fair and the Ontario 4-H Inter-Club Dairy Judging Competition. 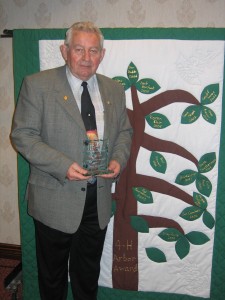 Bert has taken a team to Madison, Wisconsin for the US National 4-H Judging Competition at the World Dairy Expo every year and says at least half a dozen of the team members have gone on to become official judges, something Bert always takes great joy in watching. His judging experiences haven’t been limited to 4-H and North America though, as he’s had the opportunity to judge in 17 other countries around the world, with Brazil being his most frequent destination, somewhere he’s visited what he estimates was around 85 times. “It was like a second home,” he says, of the house he once stayed in four to five times a year, where you could lie awake at night and hear the waterfalls come down the creek from 15 feet away. He spent a lot of time down there judging and purchasing cattle and always made sure to bring a youth who had a keen interest in the industry with him to shows in Brazil. To list all of Bert’s accomplishments throughout his career could likely fill many pages in this magazine, but he has amassed numerous awards and recognitions in the agriculture industry including receiving the Centennial Award in 1988 for outstanding service to the industry from the Ontario Ministry of Agriculture, Food and Rural Affairs (OMAFRA). In 2002, he received the Queen’s Golden Jubilee Medal for his continued years of community service and in 2010 he was inducted into the Canadian Agricultural Hall of Fame. In 2012, Bert was awarded the Queen Elizabeth II Diamond Jubilee Medal by 4-H Canada. This award commemorates Canadians who have positively impacted their community and distinguished themselves as leaders. Today, Bert has dedicated 46 years to being a 4-H volunteer and in 2006 he was awarded with 4-H Ontario’s most prestigious award, the Syngenta 4-H Ontario Arbor Award for his efforts. The nomination came from a 4-H member from one of the judging teams. His induction into the Canadian Agricultural Hall of Fame is one memory he cherishes dearly. “It means everything,” says Bert when asked about how it feels to receive that sort of acknowledgement. “The best thing about being in the Hall of Fame was that my wife (Hazel) was still with me. 4-H had a lot to do with me being put in the Hall of Fame.” The memory was further enhanced when his nephew Lyndon Stewart brought a bunch of 4-H kids Bert knew to the ceremony as a surprise. In her speech at the presentation, his daughter Kelly spoke about what 4-H meant to her father and said 4-H has had a tremendous impact on their entire family and that his 4-H training prepared him for a truly great and exciting life. Always looking to be more involved in the program, he represented 4-H as the Canadian 4-H Council President from 2005-2006, as a member of the Council thereafter and also as a Trustee on the Ontario 4-H Foundation. “I was asked to do it, so I got involved that’s all,” he says. “And if I was involved, I was involved. I could’ve done other things, but 4-H was good to me, and I owed it to them. I’m happy I did what I did and I’ll probably still go to quite a few 4-H events in the future.” When he says 4-H was good to him, sure he could be speaking of the countless doors and opportunities it’s opened to he and his family, or how he met his wife Hazel at a dance at the Junior Farmer’s building, but he’s also speaking of the great coaches and mentors he had as a youth when he learned from the Agricultural Representatives in his region. Sit down and chat with Bert and you can see those are some of the things he still holds dear and wants to share with today’s youth. One of the many ways he does this is with the award he established with his late wife Hazel in 2010 for 4-H Dairy Club members in grade 9, 10 or 11. The Bertram and Hazel Stewart 4-H Dairy Youth Education Award & Bursary honours their deep commitment and passion toward agriculture, education and 4-H. The $1,000 award and bursary is presented by the Stewart family at the TD Canadian 4-H Dairy Classic during the Royal Agricultural Winter Fair as a Living Legacy gift, which Bert is able to see the impact of each year. Part of their hope for this bursary was to encourage youth in the 11-14 age bracket to continue to stay connected to the program, an age group where he says 4-H’ers often get involved with other interests. Whether he’s talking about his days as a member himself, a dinner he recently took a past judging team member to, letters he receives from youth, events and people he’s looking forward to attending and seeing, sleeping by waterfalls in Brazil or how he once purchased a calf for $4,500 and sold her last son, a six-year-old bull for $600,000, Bert is a fountain of stories, ideas, experiences and full of passion for all things 4-H.