Sudbury’s Wayne Macdonald is 4-H Canada’s National Volunteer of the Year By Ryan Métivier Wayne Macdonald has spent years engaged in his  community. A soccer coach for over 15 years, 25-year member of the Knights of Columbus, associate member of the Legion of Canada and executive board member of the Westmount Playground Association – Wayne has enriched the lives of many youth and adults while volunteering. 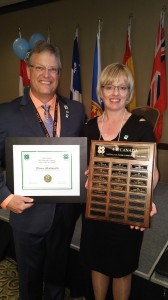 However, he had never been a part of 4-H. A Cubs and Scouts member as a youth, it wasn’t until he married his wife Paulette in 1986 who was a 4-H alumna in Renfrew County, that he was first exposed to the program. In 1988 he helped her start a 4-H club in Arnprior and has never looked back. Nearly 30 years later Wayne and Paulette have led clubs in almost every category of project available. That commitment to developing youth in 4-H was recently acknowledged at the 4-H Canada Annual General Meeting in June where Wayne was named National Volunteer Leader of the Year. “Our philosophy is to offer projects each year that touch on certain key areas of 4-H in order to provide a well-rounded experience for the members,” he says. Wayne is also the Vice-President of the Sudbury District 4-H Association, while also volunteering as the Awards Coordinator, Webmaster, Screening Committee member, for several years as the Region 1 President and throughout all levels of Go For The Gold. Wayne feels the biggest takeaway youth get from 4-H is confidence and personal development. “Since the hands-on lessons and experiential learning is so positive, the members can go out in life and use these skills immediately, no matter their age,” he says. “This strengthening of character is vital; after all, we are growing society’s future leaders.” Wayne truly believes in the 4-H motto, ‘Learn To Do By Doing’ and enjoys sharing his life experiences with the youth in 4-H. By embodying the 4-H motto and living the 4-H values, he believes both he and Paulette help members to become more confident and better equipped to excel in their lives, while also being better and more compassionate citizens. “The beauty of our ‘4-H relationship’ is that there is Wayne, there is me and there is ‘us’,” says Paulette. “This is why I have enjoyed volunteering over the years and still feel so passionate about my involvement. We give each other space to be ourselves yet we have a consistency and a style that is ‘us’! We learn, we grow, we enjoy and we receive so much from the members.” Paulette believes Wayne’s authenticity and joyful demeanor allows members to feel safe, accepted and free to be themselves and grow. These sentiments were on full display in Wayne’s nomination for the National Volunteer Leader of the Year Award. In her letter of nomination, 17-year-old Youth Leader Meaghan Ethier said Wayne makes the community a better place simply by being a part of it. “He has an infectious positive attitude that encourages us as youth to be better people,” she says. She continues to say Wayne is an amazing role model in Sudbury and has had a huge impact on all members of their club. “Wayne is a lot more than my 4-H leader. He is an example of the kind of person that I want to become.” To receive the award was quite the honour for Wayne and something he was shocked to find out, as he was unaware of the nomination. “Being honoured for what you do in life is amazing,” he says. “Being honoured for volunteering your time and skills is amazing. Being honoured by the youth you share the 4-H program with is a gift of a lifetime.” 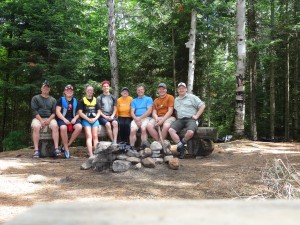