Written by John & Marlene Dunford We established the Elwood Dunford Family Fund to recognize and pay tribute to the contribution to 4-H by my dad who helped to start the Lakefield 4-H Beef Calf Club back in 1954. My sister Mauretta was in the club the first year. I went to the meetings but had to wait another year before I was old enough to join. The club later became the Douro 4-H Beef Club where dad was the leader up until his death in 1977 at the age of 69. Dad only had about a grade four school education so he struggled with reading and writing but was well respected as a leader. 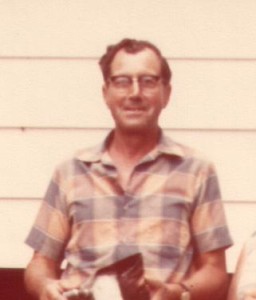 4-H was a big part of my life as a teenager. I was in the beef club every year and field crop club for many years, as well as other clubs like farm safety. I was fortunate to be selected to attend interclub competitions and 4-H leadership conference at the University of Guelph. I was awarded Outstanding 4-H member for Peterborough County in 1960, competed in the Queens Guinea’s Steer Show at the Royal Winter Fair three times and competed in the Inter-County Judging Competition at the Royal in 1961 with the winning team It was probably my involvement in 4-H that lead me to attend the Ontario Agricultural College (OAC). While there I competed in College Royal and was All-Round Showman in 1964. Showing an animal in the showring is a traditional showing experience but the first placings in eggs and honey is what gave me the points to win this trophy. I remember going through about 20 dozen eggs to get a uniform dozen. The secret on honey was pouring it warm into the jar without creating bubblies. Also at Guelph I won the A. D. Runions Memorial Award as the member of the OAC Dairy Cattle Judging Team with the highest aggregate score in the International Inter-Collegiate Judging competition. After graduating from UofG I worked with the Ministry of Agriculture as an Assistant Ag Rep and was heavily involved in the county 4-H program. It was during this time that I met Marlene, a town girl, at the Junior Farmers bowling club. In 1969 we purchased a dairy farm in my home neighbourhood and farmed for 33 years. I spent 19 years as a leader of the 4-H Dairy Club and our girls were each a part of 4-H for one year. They were also involved in figure skating and skated all year- round. They learned commitment, dedication, confidence and respect—all the qualities we try to instill in our 4-H members!