For more info on the Ambassador program click here. To book an Ambassador for your event please complete the request form. Submitted by Lyndsay Dickson, 4-H Ontario Youth Ambassador from Leeds 4-H Association 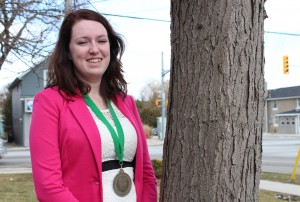 It is hard to believe that 2018 is here already. Where did 2017 go?! 2017 was a year of growth for me. A year that taught me to say “yes” to new adventures, taught me how rewarding experiences can be and taught me how to navigate on my own.   January 2017 – I was selected as a 2017 4-H Ontario Ambassador, an experience that has changed my life! February 2017 – We celebrated success, as we were officially welcomed as ambassadors at the 2017 Ambassador Reception. Shannon, Sierra, Nicole, Robert, Sarah, and I gathered with family and friends by our sides in Guelph as we were welcomed as the 4-H Ontario Ambassadors for 2017. March 2017 – I began a social media feed to share my year as an Ambassador. You can find my adventures as a 4-H Ontario Ambassador on Twitter, under the handle @dicksonlyndsay. April 2017 – I attended the 2017 National Holstein Convention in Richmond Hill, Ontario as part of the Young Leaders Program. May 2017 – I moved out! After nearly 20 years of living under my parents’ roof, I found a place to call my own and moved out to start a new adventure of life on my own. June 2017 – My first event as an Ambassador! My first event as a 4-H Ontario Ambassador was the UPI Energy Invitational Golf Tournament. July 2017 – My first 4-H dairy show of the season was a success! My first 4-H dairy show of the season was the EastGen Showcase held in Spencerville. I was lucky enough to walk away with 6th Senior Heifer and Top Quiz. August 2017 – I found out that the first heifer I owned is pregnant and due in March 2018! I have my own prefix with Holstein Canada, Experience Holsteins. I own one heifer, Rockaberry Mogul Experience. I found out that she is expecting her first calf, which is also the first calf to carry the Experience Holsteins name in March 2018! September 2017 – I had the pleasure of visiting Niagara Falls for the first time. Fellow ambassador Sierra Stanley and I visited the beautiful Niagara Falls together following the UPI Energy FS Launch Party. October 2017 – I celebrated my 21st birthday! As all senior 4-H’ers will know; what your 21st birthday really means, is it’s almost the end of their 4-H career! 2018 will mark my final year as a 4-H member. November 2017 – I attended my 5th consecutive TD Canadian 4-H Dairy Classic as an exhibitor. I had the pleasure of representing the Leeds 4-H Association at the Royal Agricultural Winter Fair, held in Toronto every November, at the TD Canadian 4-H Dairy Classic. 2017 was my 5th consecutive year being a member of the Leeds team. December 2017 – I celebrated the holidays with family and friends. I am forever grateful for the amazing opportunity representing 4-H Ontario as an Ambassador for 2017. Thank you FS for this opportunity! Once an Ambassador, Always an Ambassador.