By Ryan Métivier Farming, agriculture and 4-H have all been key pillars in the McNabb family their whole lives. Both Marie and Ken grew up on farms and were both 4-H members as youth. Marie has spent time consulting with farmers during her time working for the Ministry of Agriculture and Food for 13 years. Today, she serves as a Director for Gay Lea Foods, while also doing the bookkeeping at the family farm. That family farm began with the dairy farm Ken grew up on in Halton County. Ken 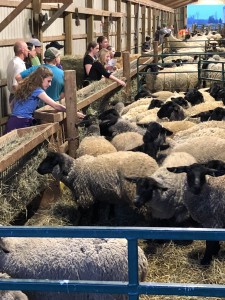 would go on to eventually purchase the farm from his parents and he and Marie would form a partnership when she stopped working full-time off-farm. Today they call the more rural Waterloo County home, after shifting their herd from a tie stall barn into a milking parlour and free stall in 2005. “We felt that dairy farming would be transitioning towards milking parlours and robots in the future,” says Ken. “In 2015 we built a new dairy barn with a couple of milking robots and have grown from there, now milking 75 cows.” Overall they crop 271 acres providing all the roughages for their herd and selling IP soybeans and winter wheat. Marie has seen many changes in the agriculture industry over the years saying things are becoming increasingly high-tech, with monitors, robots and automatic calf feeders. With new technology and science, farmers are learning to use their smart phones in the field and social media as a way to reach out to consumers. “It [social media] can be a method of answering questions about everyday activities on the farm, connecting the dots and carrying out conversations with people who truly want to learn about all types of agriculture,” she says. With the University of Guelph stating there are currently four jobs for every graduate, Marie would highly encourage youth to consider the industry that encompasses farming, the food industry and suppliers. Both Marie and Ken would also strongly recommend youth being involved with 4-H. Marie was a member for seven years in Oxford County completing dairy, homemaking and garden projects, as well as attending the 15 Year Old Conference. Ken was an eight-year member in Halton County, enrolled in dairy, crop, tractor and judging clubs. He also attended the 15 Year Old Conference, Provincial 4-H Leadership Camp and was chosen to go to the American Youth Foundation Leadership Training Camp. Among the many things they appreciate from their time in 4-H, are the great mentors they had the opportunity to learn from. Ken remembers fondly his Ag Rep Henry Stanley, as well as his neighbour and leader Jeff Nurse whom he later co-led with. Marie was able to learn through her mother and also Sharon Hart during her time in homemaking clubs. 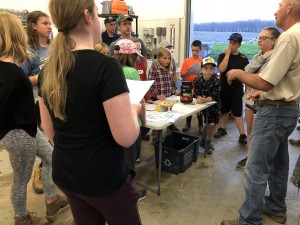 Now, they are mentoring today’s 4-H members including Noah and Olivia Lichti who have participated in clubs lead by the McNabbs. “Ken and Marie are very passionate about 4-H,” says Noah. “Ken has helped me a lot with judging and showing my dairy heifer.” “They are very knowledgeable in what they do and their enthusiasm is contagious,” adds Olivia. Both came from 4-H families and have decided to continue their 4-H careers as volunteers and leaders after their time as members. “I think as a volunteer I’ve always enjoyed working with the younger kids and I’m trying to pass on some of the knowledge and skills that I learned through 4-H,” says Ken. “My reward in volunteering is seeing a child develop, grow, take chances and want to try something new; watching the quiet person coming out of their shell from the beginning of a club to the end of the club,” adds Marie. “Many times I have heard it said that 4-H develops life-long friends. We try to enhance that.” 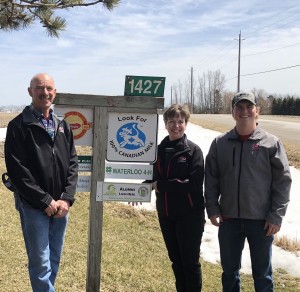 Another youth, Philip Cressman, has been a dairy member for three years and has shown a calf from the McNabb’s farm each year. “They are helpful and give me lots of tips on how to prepare and show my calf at the Elora show and the New Hamburg Fair,” he says. “Ken and Marie are very passionate about 4-H. I look forward to going to 4-H meetings and learning about calves. They have welcomed me into the 4-H world with open arms.” Mentoring and leading just seems to run in the family as each of their oldest and youngest sons, Colin and Liam began volunteering while only 18 and still members themselves. Marie sees so many ways youth can benefit through the 4-H program. She lists judging, communication, public speaking, leadership, teamwork financial management and cooking—to name a few of the skills youth will develop. “There is a certain amount of competition in 4-H. It doesn’t matter where young people will go in life they will compete; whether it’s for a job, a spot in a program at university or college or an apprenticeship,” says Ken. “The skills that members learn when judging in our clubs are teaching them to make decisions and by giving reasons they learn to defend their decision.”