By: Kendra Saxton  According to statistics from the Canadian Cancer Society “Nearly 1 in 2 Canadians are expected to be diagnosed with cancer in their lifetime.” Chances are, each and every Canadian has been touched by cancer in some way, whether that means living with the disease yourself or knowing friends or family who have been affected. For most people, the fact that half of Canadians may be faced with the life-altering news that they or someone they love has cancer is devastating. For the Oxford Community 4-H Club, these numbers gave them the motivation to show that we are all bigger than cancer. On Friday, June 14, 2019, the Oxford Community 4-H Club participated in the 2019 Relay for Life event in Woodstock, Ontario. Relay for Life is a special fundraising initiative started by the Canadian Cancer Society and has been changing the future of cancer for more than 20 years. During the 6-12 hour event, participants take turns walking around a track in support of those living with cancer and to remember those who have lost their lives. At least one person from each team is asked to be on the track at all times and walk in support of those currently living with cancer, representing that nobody is alone in their journey. While off the track, participants have the chance to enjoy other activities and entertainment and even design a luminary to honour the loved ones they have lost. 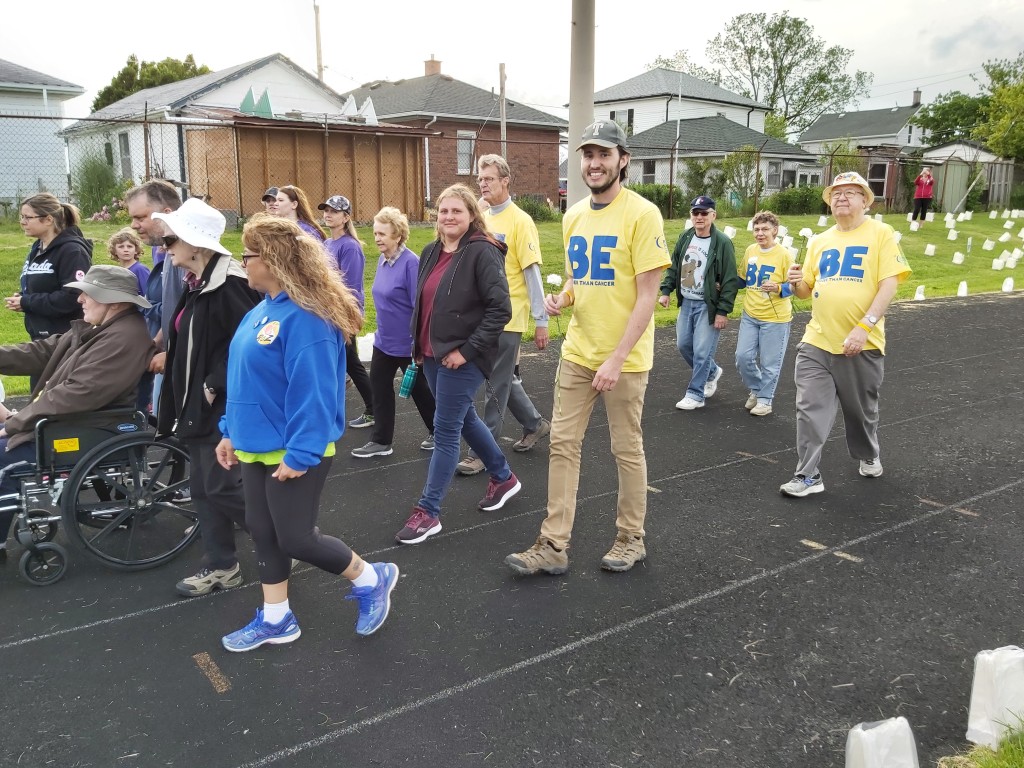 This is the 13th year this Community 4-H Club has taken part in the Woodstock Relay for Life, the first event dating back to 2007. In 2006, many of the Oxford 4-H Exchange members became very good friends, resulting in Shonna Ward, a member of the Club making the decision to participate in this initiative shortly after. One of the members of the Oxford 4-H Exchange, Katrina Hart, had called Ward and asked her if she would consider being a chaperone for the Relay for Life team. Hart’s mother, who had been the chaperone for the exchange, promised she would participate if Ward would. That was all the persuasion Ward needed to join forces with Hart’s mother, partnering as chaperones for the Community 4-H Club team. Many of the team members were from across Oxford County and this resulted in the creation of the team name “Community 4-H Club.” Several siblings from the original team still participate in Relay for Life along with all the new members. The Community 4-H Club team is truly special because all of its members have been affected by cancer and are committed to making a difference and continuing to be good community citizens. The amount of support and dedication the Community 4-H Club gave to the cause this year was exceptional. In this year’s relay, eleven members aged 10-21 and three volunteers participated in their event from 6pm to 12am, all with the purpose of raising money for cancer research that will help find a cure and supporting those affected by cancer. The team committed to buying 100 luminaries to light and line the track with as well as walking 180km in total as a team. The Community 4-H Club accomplished just that and made the outstanding achievement of raising a team total of $14,200 for the 2019 Relay for Life, crushing their target goal of $11,000! Over the past seven years, the team has raised over $10,000 annually through hard work and vast fundraising efforts. Over 13 years of participating in The Relay for Life, the Community 4-H Club has raised a grand total of $129,000! 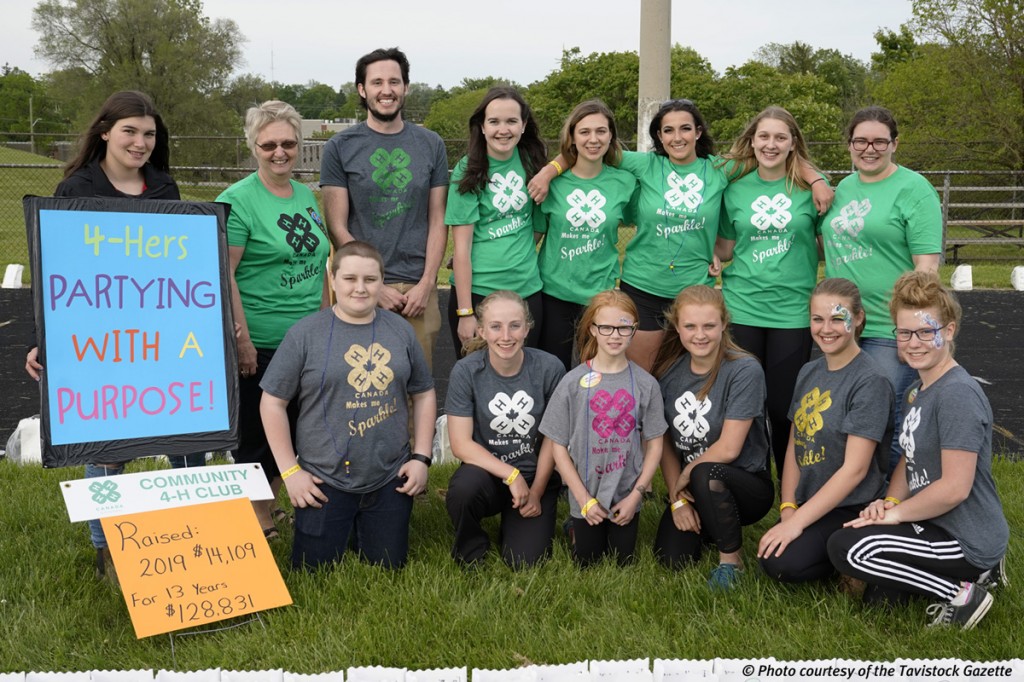 The team would not have been able to raise these funds if it weren’t for their tireless work within their community. In addition to Relay for Life, the team raises funds year-round and has been fundraising since July 2018. Ward believes that the key learning members take away from their club is how working with local organizations can create real change towards a larger goal. The team has assisted in roadside cleanups with Hickson Lions Club and Tavistock Men’s Club, and helped Oxford Junior Farmers with a cleanup at Roth Park. They also collect electronic scrap, used pop cans and other recyclable materials and send it to local recycling programs to be cashed in. Additional work included helping at the Oxford 4-H pancake fundraiser and selling pop and water, and assisting with set up at the Embro Truck & Tractor Pull. Instead of just asking for pledges, the members work hard to receive a donation, they find the community work proves to be equally as rewarding. 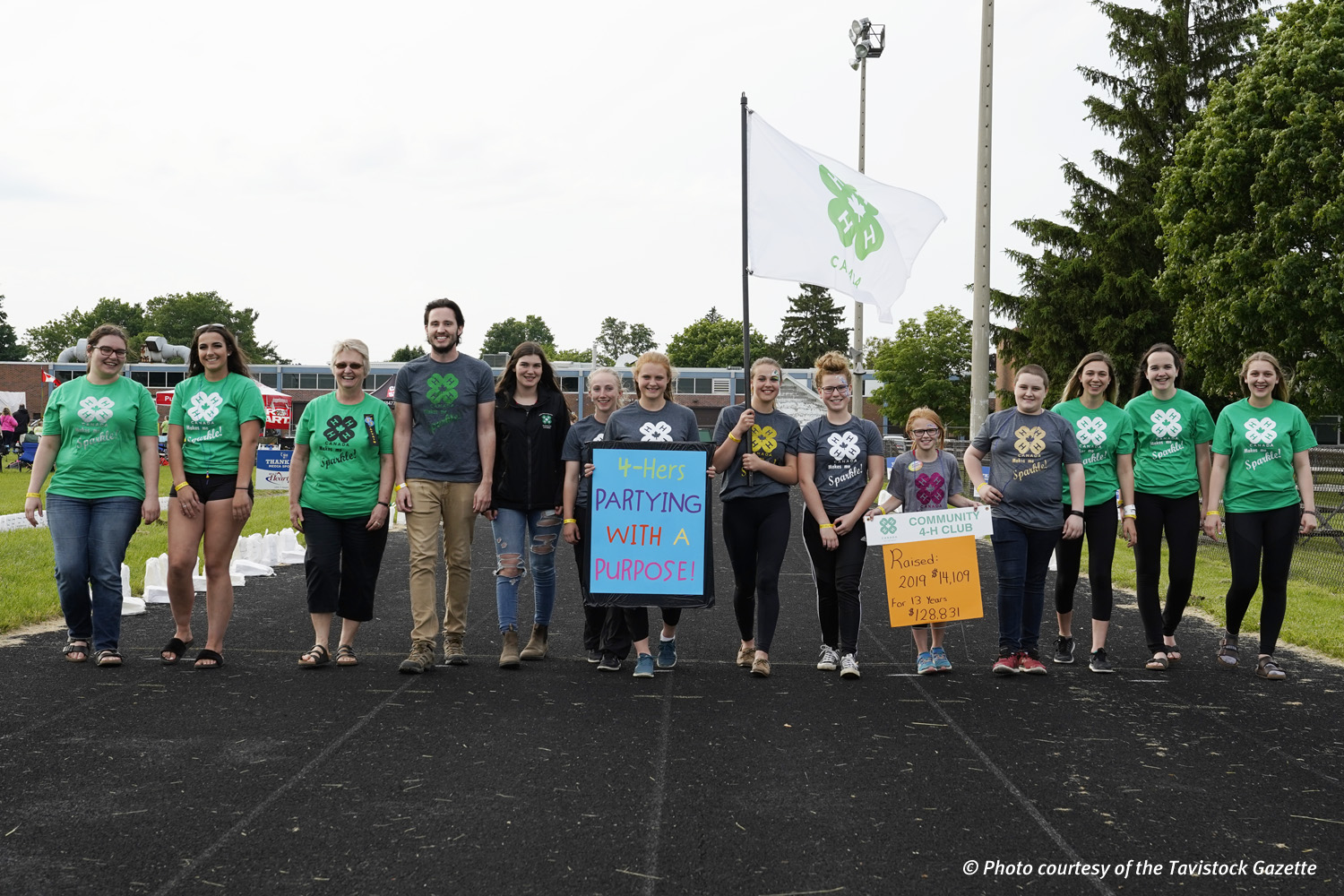 While the 2019 event was an incredible success, the fight does not stop here. Today, we must all continue to celebrate cancer survivors, support those who live with cancer, and also honour the legacy of our loved ones, friends and family, who we have lost. We will continue to relay off the track, stand together and support each other so that no one feels alone in the face of cancer. Today and every day, we will work together as a community and change the future of cancer, through growing awareness, raising money for cancer research, and ultimately finding a cure. The Community 4-H Club yet again proves that the bond of communities can be an unstoppable and powerful force.