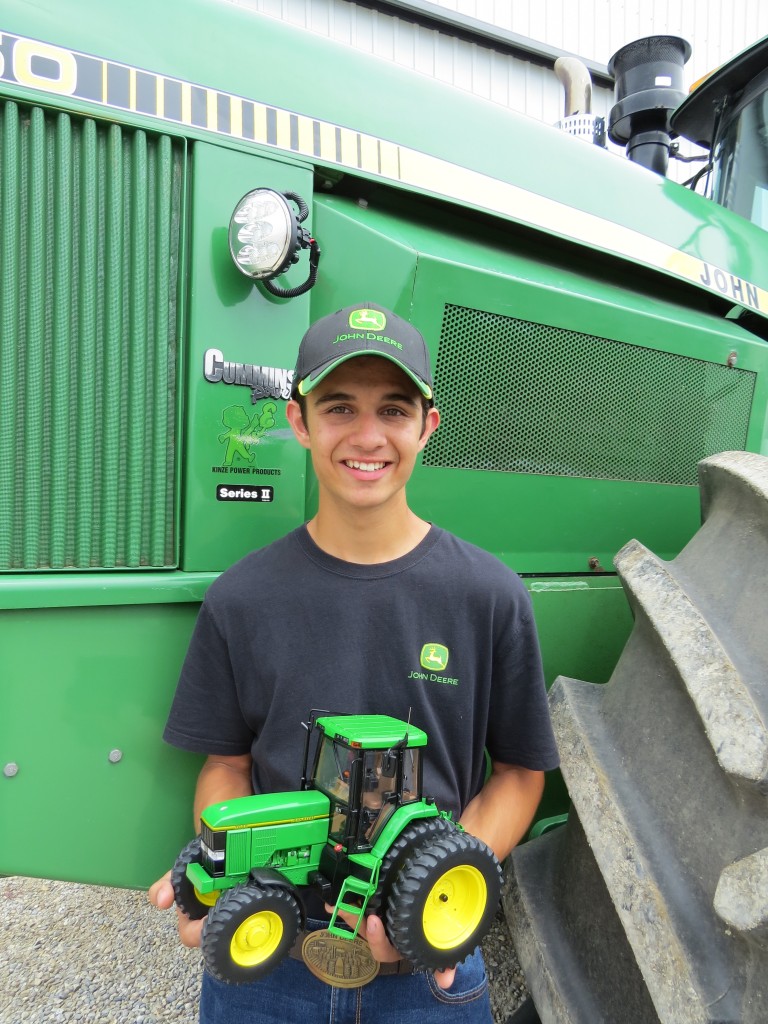 Reprinted with permission from Toy Farmer magazine. By Luaan Dart Members of the Chatham-Kent 4-H Association Farm Toy Club in Southwestern Ontario, Canada, are “learning by doing,” by creating farm toy dioramas that realistically depict everything from a family farm to a tree farm. “In 4-H, our motto is ‘Learn to do by doing,’ and I think our club, being such a hands-on club, is a very good example of that,” says 16-year-old Matthew Sterling, the youth leader for the Chatham-Kent 4-H Farm Toy Club. “Our immediate goal in the club is to create the dioramas, but our long-term goal is to share knowledge and enthusiasm for the farm toy hobby.” The 4-H club was launched in 2005 by Matthew’s parents, Carl and Julie Sterling of Pain Court, Ontario, Canada, and Matthew’s two older brothers, Robert and Brian, who were teenagers at the time. “In the beginning, it was focused on restoring and customizing 1/16 scale farm toys,” Matthew describes. Three years ago, the club members switched their focus to creating scale dioramas with 1/64 scale farm toys. 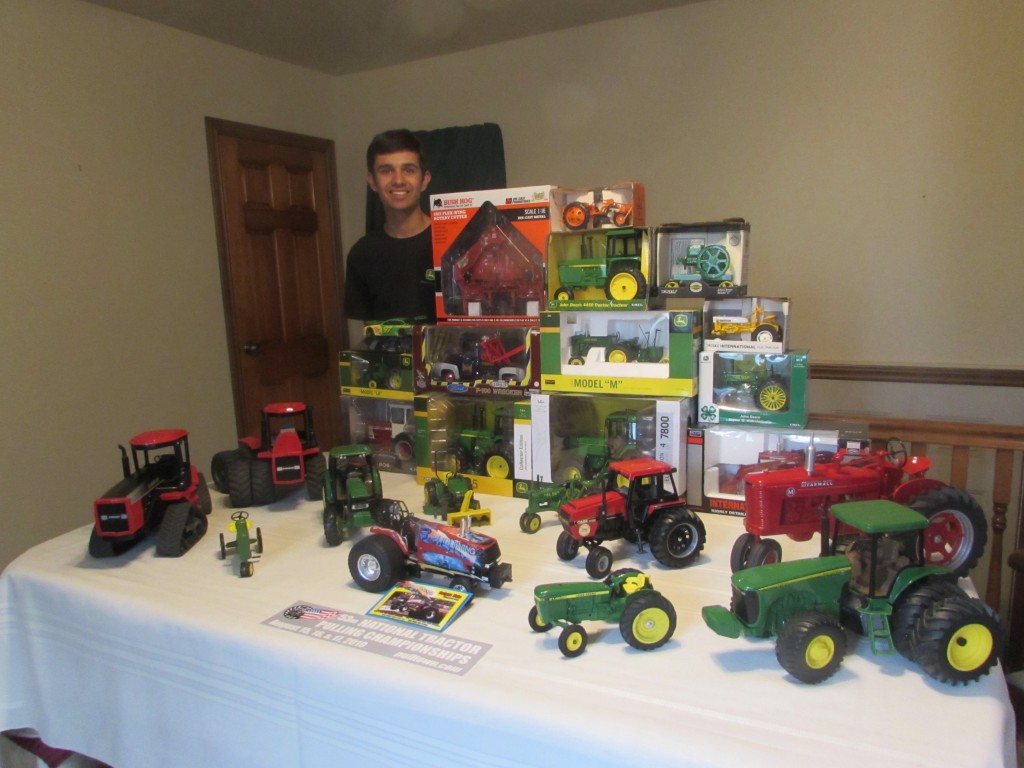 Matthew Sterling with the 1/16 scale models in his farm toy collection.

Carl and Julie, along with Rob and his wife, Katrina, serve as adult leaders, with Matthew serving as the youth leader. They are all longtime farm toy collectors, as Carl and Julie started to collect farm toys shortly after they were married in 1984, with a special interest in replicas of tractors used on their farm, according to a Toy Farmer feature story in October 2007. Today, they continue to share their knowledge and interest in the hobby with area youth. “There’s just a passion for it,” Matthew shares. Each year, the members of the 4-H club, who, this year, range in age from 10 to 16 years old, create a diorama on a 3- by 3-foot board. “Most of the work gets done during club meetings, but they do have to do some of the work as well on their own,” Matthew says. “Basically, we’re trying to share the knowledge that we have with others. That way, they can learn at the club and if they want to go home and apply it and make even larger, scale dioramas, they can do that.” Once the dioramas are completed, club members display their work as part of the achievement program at the Chatham-Kent Toy Show and Sale, held in January. This year, eight members were involved in creating and exhibiting dioramas. “This past year, we displayed over 50 feet of displays, enjoyed by those attending the toy show,” Matthew says. Each 3×3 diorama includes a similar roadway in the same location, so when each individual board is connected, the road lines up across all the dioramas. The individual sections then become one continuous display, he explains. The dioramas display a wide range of scenes, based on each of the youth’s perspective. Some of the displays have included replicas of family farms, a tree farm, a gravel yard, tiling in fields and farm equipment dealerships. “A lot of people like to focus on the family farm where they have lived or do live, and they build a scale replica of that. I have done that in the past,” Matthew says. “It’s whatever the kids want to create. This gives them a chance to do it and learn how to do it.” 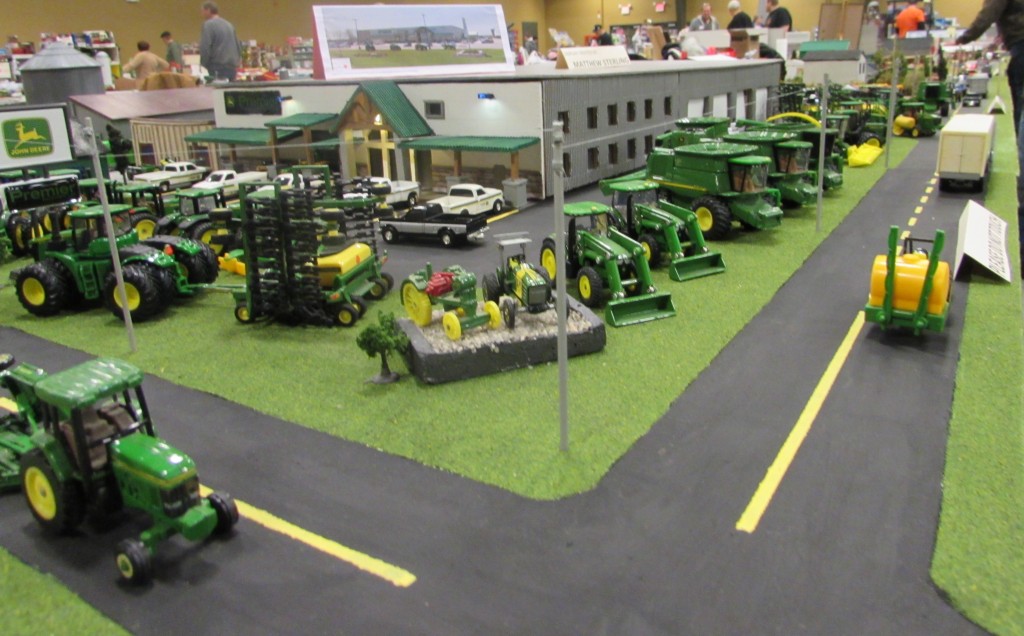 Matthew Sterling, 16, recreated a John Deere dealership as a display for the Chatham-Kent Toy Show and Sale.

Carl Sterling started the Chatham-Kent Toy Show and Sale in 2002, the same year Matthew was born. The toy show is a family affair, with Carl, Julie and Rob organizing the show, with assistance from Katrina, Brian, his wife, Annemarie, and Matthew. This is the third year the 4-H club members have displayed dioramas at the show. “It’s going to get bigger every year. The kids will bring back the boards they have done in the past and show them again,” Matthew says. “The toy show has also gotten bigger every year, and it sparks more interest as we go,” he adds. The next show will be held Jan. 19, 2020, in Chatham, Ontario, Canada. Some vendors have been at the Chatham-Kent Toy Show and Sale every year since 2002, and it is one of the largest farm toy shows in Southwestern Ontario, Canada. This year, the show included 180 tables of toys for sale and display, with 50 vendors and 30 other different displays, as well as the 4-H club’s displays. “The toy show keeps getting bigger every year. That’s exciting for me. I just hope the enthusiasm keeps growing across the community for the hobby,” Matthew says. The 4-H club’s 50-foot diorama is an important piece of the show’s popularity, too. “It is kind of funny when some people come up and see it. It’s almost like their eyes pop out. They’re just amazed with what even some of the younger kids can come up with in the club to make it look so real. I personally enjoy the interaction with some of the elders in the community, to see that interest in what we do,” Matthew says. The 4-H club has another role in the toy show, by assisting with the show and helping to raise money for the nonprofit event. “All members also help with the toy show, which raises money for the club, the local Junior Farmers Club, whose members also help with the show, and mainly our local food bank, Outreach for Hunger,” Matthew says. Proceeds from the show are donated to the food bank and to the Chatham-Kent 4-H Association Farm Toy Club to help purchase supplies to create more dioramas and to continue to “Learn to do by doing.” 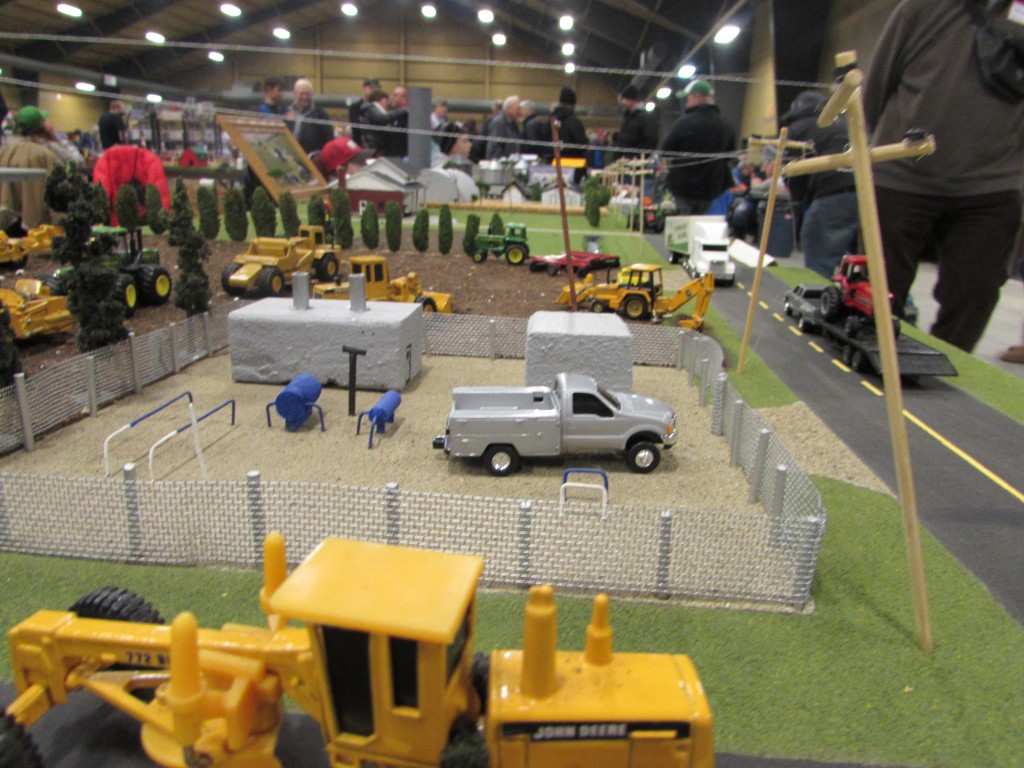 One of the leaders of the Chatham-Kent 4-H Farm Toy Club, Rob Sterling, replicated a natural gas station located at the construction site of a greenhouse.

One of the world’s largest youth organizations, 4-H can be found in more than 70 countries across the globe. The 4-H organization in Canada has more than 24,000 members and 7,600 volunteers. The four H’s represent the organization’s core values: • Head: managing, thinking • Heart: relating, caring • Hands: giving, working • Health: being, living  A family of collectors As part of a family with a passion for farm toys, Matthew’s interest in the hobby began when he was young, as he basically started attending the Chatham-Kent Toy Show and Sale as a baby. “It all started when I was really little. I was always playing with the farm toys. It kind of grew as an interest for me. Every time we were at a dealership, I was saying, ‘Hey, can I get a toy?’” he says. “I’ve grown up around it. I’ve kind of expanded a little bit more and I have my own collection now.” Matthew’s collection of 1/64 and 1/16 farm toys has grown over the years to the point where he is unsure of how many models he now owns. “I’m a John Deere fan, but I do have some of the other colours, too,” he says. He also has model train dioramas and collects miniature steam engines. “I have a lot of different toys that I enjoy, but my biggest collection is in the farm toys for sure,” he says. “I have a very large collection.” The family’s combined collections fill the farm home, Matthew says. “I think it’s sunk a few feet into the ground,” he says with a laugh about the family home brimming with farm toys. As his older brothers completed dioramas for the farm toy show, Matthew’s own interest in creating displays began. “At one of the toy shows when I was old enough, I said I want to try setting up on one of those boards,” he says, so he completed a simple display with his own toys when he was about 9 years old. “Eventually, I set up all their boards and I wanted to expand a little more. That was more of a driver for that to happen,” he says. Matthew has a particular fascination with creating as many realistic details in a display as possible. “I enjoy seeing the final product. You put a lot of work into something like that, but it’s fun when you actually see it all put together. I made a diorama that replicates the family farm and I had parked vehicles that looked similar to ours around the buildings. When I took some pictures of it, it just looked so real,” he says. This past year, Matthew replicated a farm equipment dealership, also with realistic details. “That’s part of where the club comes into play. We’re trying to teach the kids how to make trees, buildings, hydro poles, grass, fields, all the parts of it the way we have tried to do it in the past. Then the kids expand on it and say, Why don’t we try this?’ and then it looks really good in the end,” he shares. The club members often brainstorm ideas for better ways of creating a scene, he says, often using trial-and-error. “The hardest one was probably trying to figure out snow, realistic snow,” he says. “You have to make a little board separately and try all your different techniques on it and see which one you like the best.” Matthew enjoys the interaction with the club members, and sharing his own knowledge. “I’ve always been one to try and help people. That’s just something I enjoy, so it gives me a chance to help someone with the knowledge that I have and try to give them some of the tools that I have under my belt,” he says. Matthew also caught inspiration to customize farm toy models from his family and interaction with members of the 4-H club.

His favourite customization project was putting more realistic details on a John Deere 4430 tractor, adding more realistic lights and other details, and repainting it. “It has a lot of things on it that it did not have on it when it came from the toy factory to make it look a lot more realistic,” he says. “To really make it stand out in a group of toys to make it a unique item, we actually used the actual tractor paint. All of the paints that they would use on real tractors, we put on the toys to make them look more realistic.” The 4-H Farm Toy Club has definitely led Matthew to “Learn to do by doing.” “With parents being leaders, I was always at the meetings. You know how things kind of grow on you and all of sudden, you’re really excited to do that,” he says. “And it very much grew on me.” “It’s more of an addiction now more than a hobby,” he says with a laugh. 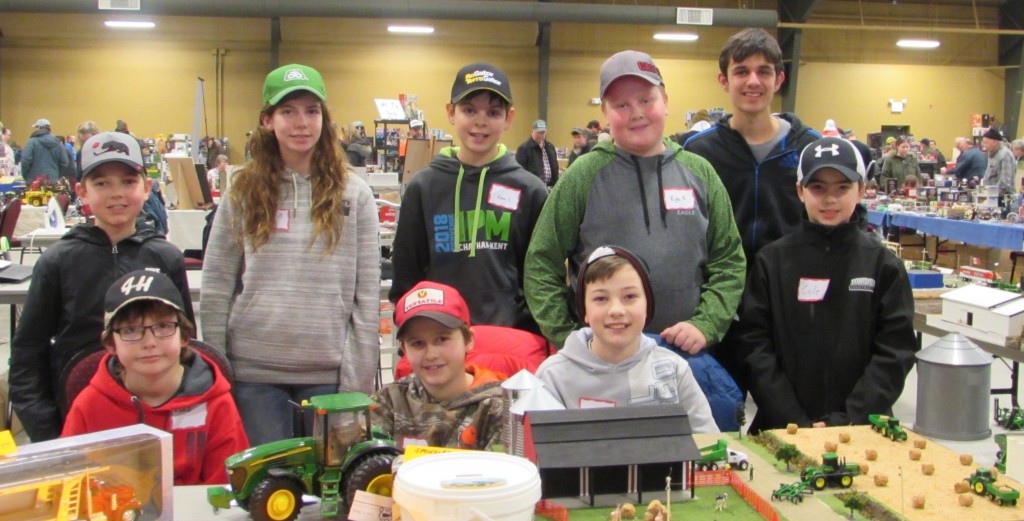