4-H Ontario has suspended all in-person activities for the duration of the current public health measure.

4-H gave me a passion for learning and growing. Here’s how I’m paying it forward 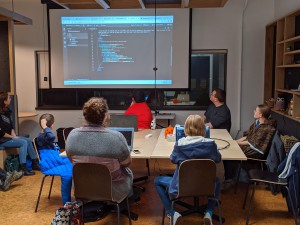 By Megan Pollock One of the things that initially drew me to apply at Zeitspace was their passion for learning and growing. This is not surprising as I have spent the last 19 years involved in another program with the same values, 4-H. I got so much out of my 10 years as a 4-H member that when I eventually graduated from the program, I immediately began leading my own clubs. This past fall I had the opportunity to bring 4-H to Zeitspace by leading a 4-H Computer Club with two other people, Todd Radigan and Tayler Black, at the Zeitspace office. So, what is 4-H anyway? For over a century, the 4-H program has been empowering youth in Waterloo Region to learn new skills and become leaders in their community. Offering clubs such as Dairy and Beef, where youth learn to take care of cattle, and Field Crops, introducing youth to the science and skills required to develop profitable crops, 4-H has typically been associated with agriculture and rural living. But more recently, Waterloo 4-H has been expanding their clubs to include skills and activities that are of broader interest, such as pizza-making, and ultimate sports. With three large cities in the centre of their region, Waterloo 4-H is especially driven to include youth from the cities in their programs and provide more programming in the downtown areas, while maintaining the programs agriculture roots. The Waterloo 4-H Computer Club was able to do exactly that, with over half of their members living in non-rural areas, and hosting the meetings right in uptown Waterloo at the Zeitspace office. One of the benefits of having the meetings at Zeitspace was that none of the parents had to travel very far. The meetings were central and easy to access for youth living in Kitchener, Waterloo, and Cambridge. The first three meetings of Computer Club introduced HTML, CSS, Javascript, and general programming logic through teaching and activities. “I’ve always wanted to learn programming so this was a great opportunity to do that,” says Rebecca, one of the Computer Club members. One of the more unique things about the 4-H program is that any given club is open to youth aged nine to 21. This allows the younger members to benefit from the mentoring and leadership of the older members, while the older members benefit from the fun and creativity of the younger members. “I learned a tonne and I feel like I understand programming more,” says Michaela, one of the club’s senior members. Meetings followed the 4-H motto of “learn to do by doing.” The fourth, fifth, and sixth meetings gave members a chance to apply what they learned on a project, which they then presented at their achievement meeting at the end of the session. “It was fun to learn more informally — lots of opportunities to ask questions and try things out and see what works and what doesn’t,” says Rebecca. Some members preferred learning general programming logic over a specific language and opted to do their projects in Scratch, an online tool developed by MIT. “I learned a lot in Scratch so now I can teach my brothers and sisters,” says Jaxion, another member of the club. The club was such a hit, members want more technology-based clubs in Waterloo Region. The parents agreed that the club was a success and one parent specifically described the benefit of the office: “It’s great to use a technology office because it has plugs, a screen, and wi-fi.” The great thing about leading STEM 4-H clubs in Waterloo Region is that I am able to bring the things I’ve learned throughout my career to help 4-H members learn new and exciting skills. Zeitspace is passionate about sharing their knowledge, and educating all ages, so introducing them to the 4-H program has been a great match. This will likely not be the last 4-H club that the Zeitspace office will see. This post originally appeared on the Zeitspace Blog:  https://www.zeitspace.com/blog/2019/11/4-h-gave-me-a-passion-for-learning-and-growing-heres-how-im-paying-it-forward/