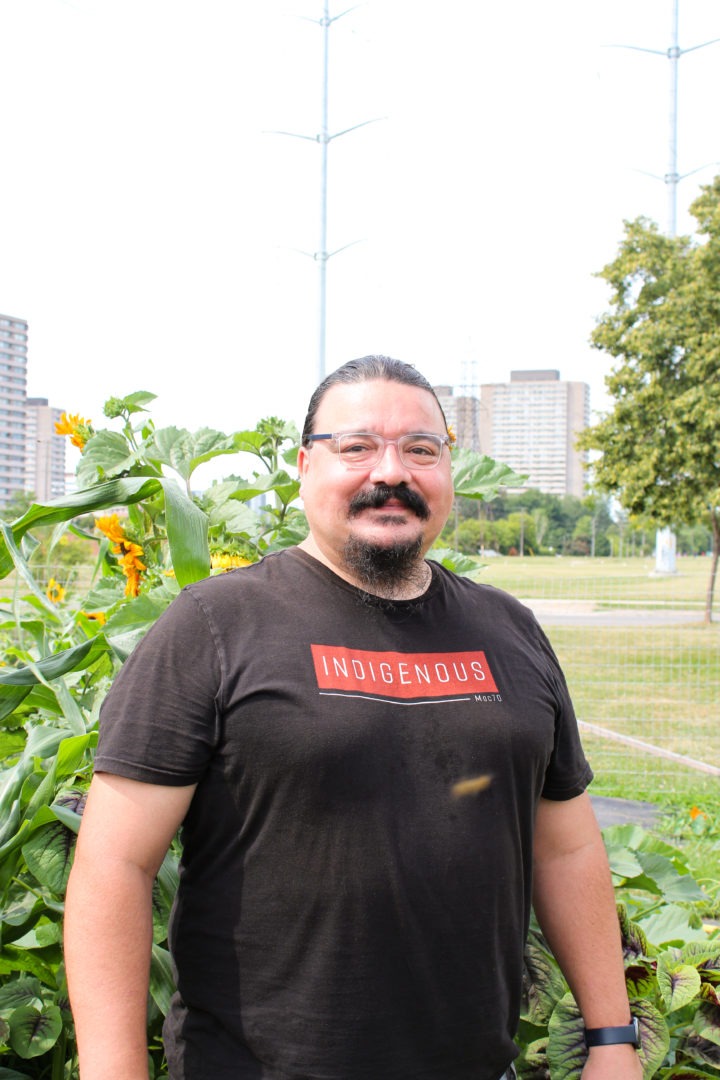 Charles Catchpole is the founder of Gitigaanes, the Ojibway word for ‘Little Farm’

Close your eyes and picture this: the buzz of overhanging powerlines, the sun touching the balconies of nearby apartments and the rumble of the Don Valley Parkway in the background. Open your eyes. Did you guess you were standing alongside sunflowers in an acre full of garden beds and fresh vegetables? I bet not.

Gitigaanes is an urban farm located near Flemingdon Park in North York, just minutes from the Don Valley Parkway. The farm is owned by Charles Catchpole, an Anishinaabe farmer and chef bringing a farm to table experience to those in Canada’s largest city, Toronto.

Charles is a member of Couchiching First Nation. He studied at Loyalist College and George Brown College and now owns and operates CharGer Foods, selling a unique line of hot sauces and salad dressings, as well as a catering company specializing in Indigenous cuisine.

Like many when the pandemic struck in 2020, Charles embraced a trial of new experiences and ways to pass the time, ‘Learn To Do By Doing’ as we know it. He fondly remembers spring cleaning and looking in the back of his pantry to find a stray potato that fell out of a container. As potatoes do, they had started to grow ‘eyes’ or in more technical terms, sprouts, and Charles decided to try out his own Covid experiment. Charles picked the sprouts from the potatoes and planted them on his balcony in Toronto to see if they would grow.

“We got about five or six pounds over the season,” says Charles. “I thought that was pretty cool, I grew potatoes in a Rubbermaid bin on our balcony.” Little did Charles know this mere Covid experiment would be just the beginning of a new adventure.

As time went on and so did Covid, in early 2021 Charles’ wife noticed an advertisement for an Indigenous Farmer posted by Flemo Farms. She immediately shared the posting with Charles. “Why are you showing this to me, I’m not a farmer,” Charles laughed. But then he thought about it and thought about it some more. “I guess I could try.” he noted.

Fast forward a few months later, Charles founded Gitigaanes. Gitigaanes is the Ojibwe word for ‘Little Farm’. Charles is one of six micro farmers at Flemo Farms located in North York. Each micro farmer has a plot of land at Flemo Farms designated for them to grow their own plants, produce and more.

“There wasn’t a day where people didn’t walk up to me along the fence and ask, ‘What is this?’, ‘What’s going on?’,” Charles shared. He noted the interest from those in the community and the 40 to 50 new people he has met through this experience. Charles says, “I think people appreciate the fact that this is in their neighborhood.”

Charles has not only enjoyed the learning that comes each day in his experience as a farmer, but also has leaned into his Indigenous culture and brought it directly into his farming.

At Gitigaanes, Charles uses the three sisters planting method, a companion planting method where corn, beans and squash are planted together to help one another thrive. When walking through Gitigaanes, you can see mounds about three to four feet in diameter, each with squash, beans, corn and sunflowers. The beans use the corn stalk to climb and grow tall, while the corn uses the nitrogen from beans to flourish. The squash grows big leaves that shade the soil and deter weeds. Lastly, the sunflowers are sacrificial in that the birds flock to them instead of the corn stalks. In 2021, Charles used amaranthus to fulfill this role.

The beans, squash and corn represent their own unique capabilities and healing properties, while this planting method symbolizes community and the importance of supporting one another in order to thrive.

Throughout the other rows lie several varieties of peppers and tomatoes, straw beds filled with garlic, onions poking through the surface and potatoes, some of which originated from Charles’ Covid experiment before he knew what was to come on his journey. Charles uses the produce grown for his own catering business, but also for farmers markets within Toronto.

In response to the findings of mass graves on the grounds of previous residential schools in Canada, Charles built a garden alongside the exterior fence at Flemo Farm in honour of the lost Indigenous children. Charles cut the mesh garden lining into letters and filled each letter with orange marigold flowers to read, “Every child matters.” Charles plans to hold a ceremony in honour of the children who never returned home and survivors along with their families who continue to be impacted by the trauma and abuse experienced at residential schools.

4-H Ontario is committed to promoting diverse voices and one way we can do that is by sharing stories of those who have traditionally been underrepresented throughout history. We share Charles’ story to celebrate his achievements as an Indigenous farmer, chef and agvocate in the most urbanized city in the country. To learn more about Charles and Gitigaanes, find him on Facebook at @Gitigaanes or visit Charger Foods online.